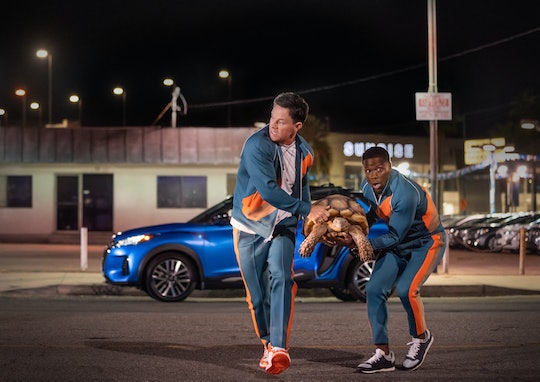 Mark Wahlberg also appears in his birthday suit in Netflix’s Me Time.

Kevin Hart knows a whole lot about being a dad, and he’s about to make you bust a gut in his new movie on fatherhood. As a comedy king and proud father of four, he often talks about #DadLife in his stand-up and even offers tips on fatherhood (via the cell phone numbers of celebrity friends). The actor shares four children, Heaven, 17, Hendrix, 14, Kenzo, 4, and 1-year-old Kaori Mai, with wife Eniko Parish. With such an extensive parenting resume, Hart is no doubt the perfect choice to play the protagonist in Netflix’s R-rated Me Time.

While Hart has already starred in a funny and moving movie about fatherhood called Fatherhood, his new flick for Netflix is a way more outrageous and over-the-top take on being a dad. In Me Time, Hart plays Sonny, a dedicated stay-at-home dad who finally takes some much-deserved time away from the family. But instead of a relaxing golf trip, he joins up with his hard-partying former BFF who takes him on a wild birthday weekend that this tame father will never forget. Here’s what else you need to know about the upcoming comedy.

Me Time premieres on Netflix in August 2022.

The star of Me Time couldn’t get enough of those exclamation points when he jumped onto Twitter to share the release date of his upcoming movie: “Aug 26th can’t get here fast enough damn it!!!!!!! Sh*t is about to get real!!!!! Mark my words!!!!!! Me Time is straight COMEDY!!!!!!!,” Hart tweeted.

The hilarious trailer is available to check out on YouTube, as is Hart’s comedic history of dad jokes.

In a movie that swaps stereotypical gender roles, Regina Hall stars as Hart’s wife and the breadwinner of the family who crushes it as an architect. Hall and Hart have previously worked together in the 2012 Rom Com Think Like a Man. Hall, who is known for her roles in Girls Trip and Scary Movie, recently hopped onto Instagram to share a funny video of the interview she endured with her teasing costars. “Always with the jokes,” Hall captioned the post.

Mark Wahlberg will appear in his birthday suit.

Mark Wahlberg stars as Huck, a former friend and party animal that takes Hart’s character along for a crazy birthday celebration. The trailer shows a buff and in the buff Wahlberg up to all kinds of shenanigans and laying on some pretty thick peer pressure to convince Sonny to get into all kinds of trouble. Wahlberg recently appeared on Live with Kelly and Ryan to chat about his NSFW scene in Me Time, which Hart also produced: “Basically he got me to appear naked in the first scene, well I have shoes on, but everything else,” Wahlberg said.

Although this is the first time Hart and Wahlberg will be appearing together in the same movie, the famous pals have some slimy history of sharing the small screen at the Kids’ Choice Awards:

Just a few months past Father’s Day, Me Time is the perfect comedy to end the summer with plenty of laughs. The movie will be ready for streaming on Netflix on August 26, 2022. So grab your dad or call up your craziest friend from back in the day, and get ready to have some “me time.”