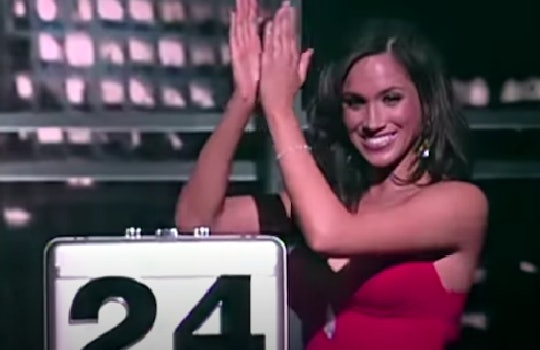 Meghan Markle Quit Deal Or No Deal After Feeling "Objectified"

“I didn’t like feeling forced to be all looks and little substance, and that’s how it felt for me at the time being reduced to this specific archetype: the word ‘bimbo.’”

Before she became the Duchess of Sussex, Meghan Markle was an actress. And one of her first roles was as a “Briefcase Girl” on the game show Deal or no Deal. That was years ago, of course, and her life has changed monumentally since then. Now she is a duchess, a humanitarian. She is married to Prince Harry, mom to 3-year-old son Archie and 1-year-old daughter Lilibet, and a podcast host. But she still thinks about her time on Deal or no Deal, and how that role made her feel “objectified.”

Markle sat down for a chat with Paris Hilton to pull apart the archetype of being a “bimbo” for the latest episode of her Spotify podcast, Archetypes. She opened up about how it felt to be scrolling through channels and come across Deal or no Deal after all these years. While Markle, a graduate of Northwestern University who studied acting and international relations, said she while was “grateful” for the work, there were some elements that didn’t sit well with her.

“I didn’t like feeling forced to be all looks and little substance, and that’s how it felt for me at the time being reduced to this specific archetype: the word ‘bimbo,’” she explained in the intro. It didn’t help that one staff member, who didn’t know how to pronounce her last name, would sometimes scream at her “Mark-ell! Suck it in!” as she stood with the other briefcase girls.

The Suits actress went on to explain that the role had her feeling as though she was being valued solely for her looks. “I had also studied international relations in college, and there were times I was on set at Deal or No Deal and thinking back to my time working as an intern at the U.S. Embassy in Argentina in Buenos Aires and being in the motorcade with the security of treasury at the time and being valued specifically for my brain. Here, I was being valued for something quite the opposite.”

Markle eventually quit the show, she explained. “I was thankful for the job, but not for how it made me feel, which was not smart. And by the way, I was surrounded by smart women on that stage with me, but that wasn't the focus of why we were there. I would end up leaving with this pit in my stomach knowing that I was so much more than what was being objectified on the stage. I didn't like being forced to be all looks and little substance, and that's how it felt for me at the time — being reduced to this specific archetype.”

Markle seems to have made it her life’s work to eschew any type of sweeping definition that would pigeonhole her. When she was a working member of the royal family, Markle spoke out about her struggles with the media, a move that saw her and her husband move away from their senior royal roles to carve their own path.