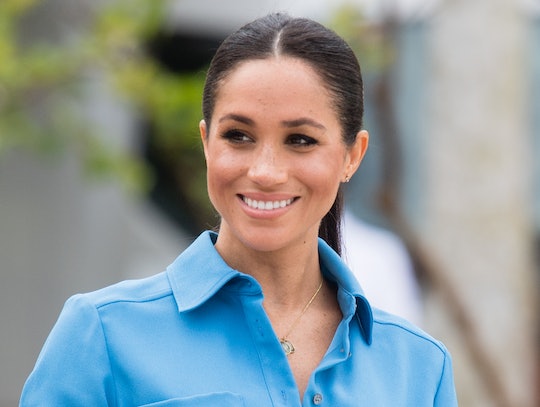 Meghan Markle's Wax Figure Had A Maternity Shoot With A Kangaroo

We have to admit, the photos are pretty darn cute.

It's official: people are very excited about Baby Sussex #2. So much so that Meghan Markle's wax figure is pregnant at Madame Tussaud's in Sydney, Australia. They even did a little maternity photo shoot with a kangaroo.

The couple shared a lovely pregnancy announcement photo, taken remotely by their photographer friend Misan Harriman on the grounds of their home in Montecito, California along with the news. In their official photo, the couple were hanging out in the grass together, looking all casual with Markle's head in her husband's lap and her baby bump evident under a long linen dress that was made for her when she was pregnant for her 21-month-old son Archie.

This was not the only Meghan Markle maternity shoot, however. In Sydney, Australia, the wax figure of the Duchess of Sussex was given a baby bump and a cheetah print maternity dress for an "Aussie style" photo shoot with a baby kangaroo named Dot.

Madame Tussauds Sydney explained on Instagram that Markle's wax figure was taken on an outing to the Wildlife Sydney Zoo for a photo shoot with Dot the kangaroo, who even gave her baby bump a little kiss. Social media users loved the photo shoot, writing messages like, "This is sooo cool," and "Looks so real. Thought it was really her." The wax figure does bear an uncanny resemblance to Markle, and for one social media it was just a bit too similar, "Too real it almost gave me a heart attack!"

Australia does have a special significance for Markle and Prince Harry; the Duke and Duchess of Sussex were on a royal tour of the country in 2018 when Kensington Palace announced they were expecting their son Archie. Which meant Australians were the first to be able to officially congratulate the first-time parents.

No wonder they wanted to commemorate the second Sussex baby with a maternity shoot this time around. And since travel is limited due to COVID-19, a wax figure of Meghan Markle with a wax figure bump will just have to suffice.