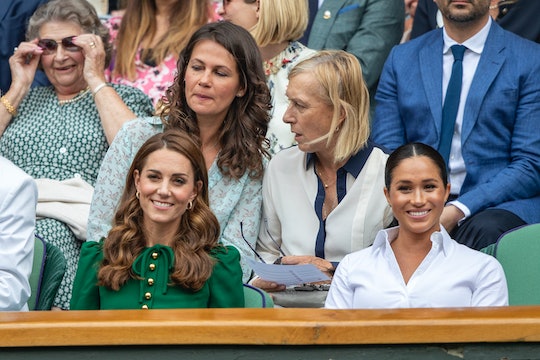 The claims are "offensive."

The dueling duchesses have been a familiar battle cry in the tabloids for the past few years. Reports from "unnamed sources" that the Duchesses of Cambridge and Sussex really can't stand each other, and the blame is frequently laid at the door of the latter. Well, she's apparently had enough. After the latest spate of tabloid reports that she's just awful to her sister-in-law, Meghan Markle responded to rumors that she snubbed Kate Middleton. Finally. She didn't owe anyone a response, but I have to say it's lovely to see her standing up for herself against the British tabloids who relentlessly criticize her. Even after she fully left the country to move back to the United States.

So it all started with reports that Meghan Markle and Prince Harry had changed their names on their baby boy Archie's birth certificate in 2019 to reflect their royal titles. The Sun reported that Markle had removed her first names "Rachel Meghan" to leave just "Her Royal Highness the Duchess of Sussex." The Sun somehow managed to take that bit of news and turn it into yet another way that Markle had seemingly "snubbed" Kate Middleton, writing, "The unprecedented move could be seen as a snub to the Cambridges who have included Kate’s names on her children’s certificates."

Markle has rarely responded to such claims, but this time her rep spoke out.

Meghan Markle's rep responds to rumors of yet another Kate Middleton snub.

In a statement to Hello!, Markle's rep first cleared up the name change for anyone whose knickers were in a knot over such a trivial thing, "The change of name on public documents in 2019 was dictated by The Palace, as confirmed by documents from senior Palace officials. This was not requested by Meghan, The Duchess of Sussex nor by The Duke of Sussex."

Then Markle's rep really brought down the boom on the Middleton snub, "To see this U.K. tabloid and their carnival of so-called 'experts' chose to deceptively whip this into a calculated family 'snub' and suggest that she would oddly want to be nameless on her child’s birth certificate, or any other legal document, would be laughable were it not offensive. There’s a lot going on in the world; let’s focus on that rather than creating clickbait."

It remains deeply mystifying that the British tabloids appear so keen to drum up issues between Kate Middleton and Meghan Markle, even after she and her husband took their son Archie to live in California and step down from their senior royal roles in 2020. Apparently moving across the world was not enough, they still want to see a feud between two sisters-in-law who are trying to raise their little ones in peace.

Hopefully now they will knock it off.