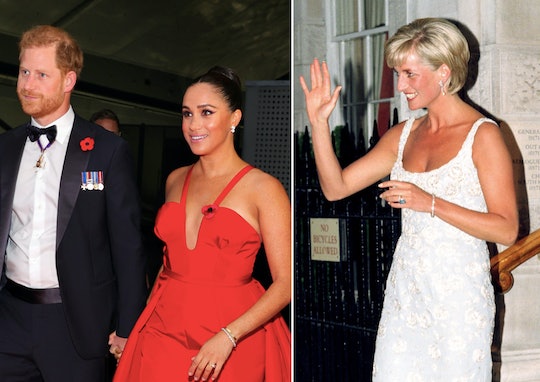 And it’s not the first time she’s been spotted wearing it.

Meghan Markle rarely misses an opportunity to pay tribute to Princess Diana, the mother-in-law she never got the chance to meet. Whether she does this through her actions as an empathetic humanitarian, with the love she shows to Prince Harry and their two children, or with something more subtle, like wearing her bracelet, the Duchess of Sussex makes her admiration clear. And earlier this week, she did all three.

The Duke and Duchess of Sussex attended the Salute To Freedom gala on Wednesday night in New York City to honor veterans. The couple looked impossibly glamorous, of course, with Prince Harry dressed in a tuxedo while Meghan wore a red Carolina Herrera dress with matching red Giuseppe Zanotti heels. And on her wrist, as Us Weekly reported, a delicate Cartier diamond tennis bracelet that once belonged to Princess Diana.

Meghan has worn that particular bracelet before. For example, when she and Harry sat down for their bombshell interview with Oprah Winfrey back in March, the Duchess of Sussex wore that same bracelet “to have [Harry’s] mother there with them during the interview,” her spokesperson told TODAY at the time.

Princess Diana passed away when Prince Harry was just 12 years old, but she continues to be a woman of influence in his life and that of his wife all these years later. Meghan appears to choose to wear Princess Diana’s jewelry for meaningful events, like that important Oprah Winfrey interview or attending an event to honor a cause that is especially important to ex-military man Prince Harry. She also seemed to channel Princess Diana when asked by a reporter if she was proud of her husband and answered with a big smile, “I’m always proud of him.”

This isn’t the only piece of Diana’s jewelry that Harry has given his wife. Meghan also wore a special watch from Princess Diana when she read from her children’s book The Bench, which she wrote about the relationship between her husband and son. Her jewelry choices seem to have less to do with fashion (although both the watch and the bracelet are obviously stunning) than they are about connection.