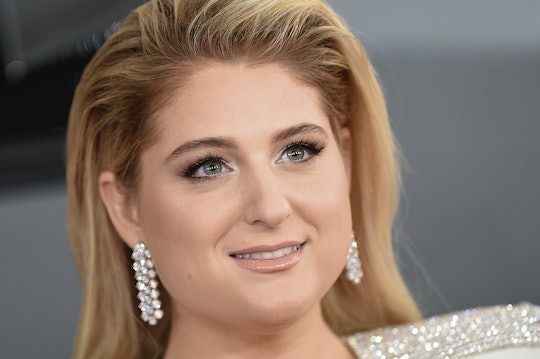 Meghan Trainor Opens Up About Her "Manageable" Gestational Diabetes Diagnosis

"Got a little tiny bump in the road"

In a recent interview with TODAY, Meghan Trainor revealed she was diagnosed with gestational diabetes. And while any health diagnosis can be stressful, particularly during pregnancy, the 26-year-old pop star appears to be taking it in stride.

The "All About That Bass" singer is expecting her first child with husband Daryl Sabara in early 2021, and revealed in October that her little one is a boy. During a guest appearance on TODAY on Wednesday to promote her new Christmas album, A Very Trainor Christmas, she opened up about a recent diagnosis. "Got a little little tiny bump in the road — I got diagnosed with gestational diabetes, but it's manageable and it's OK and I'm healthy and the baby's healthy," the singer shared.

According to the Centers for Disease Control and Prevention (CDC), around 2% to 10% of pregnant women in the United States are diagnosed with gestational diabetes, a specific type of diabetes that develops during pregnancy in women who did not previously have the disease. It's a condition that occurs when your body is not creating enough insulin during pregnancy and can be triggered by hormonal changes that naturally occur during pregnancy like weight gain. Gestational diabetes can cause baby's birth weight to be larger than average, above nine pounds in some cases, according to the CDC, which could lead to C-section deliveries.

So how is Trainor dealing with her diagnosis? She told TODAY that she "got a trainer and I stopped eating crap" as a result of the diagnosis, adding "I just have to really pay attention to everything I eat. It's nice to learn so much about food and health and nice to hear that so many women experienced this."

The expectant mom might be going through pregnancy for the first time, but she's rolling with the changes. Not only with her gestational diabetes, but also knowing herself well enough to comfortably say no to pregnancy sex. In November, she admitted, "Maybe this is weird, but mentally I can’t have sex while our son is in between us. All my pregnancy apps say it feels really good. But all I can think about is there's a little boy in my belly," and I suspect several moms totally understood how she felt.

Trainor's gestational diabetes diagnosis might not be ideal, but she is making the best of things. Working to keep herself and her baby healthy, making changes.