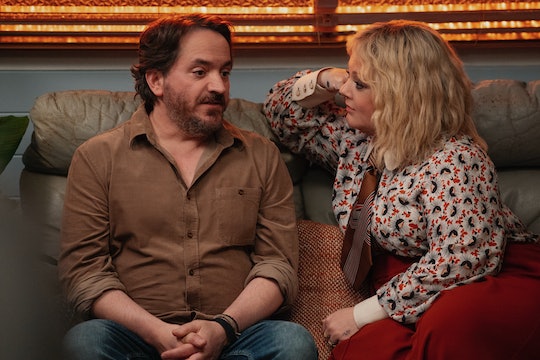 Real life dream couple Ben Falcone and Melissa McCarthy have collaborated on many amazing projects over the years. Movies. Instagram videos. Daughters. But it’s been quite some time since they’ve played opposite each other as love interests, and let’s face it; this is what we all want to see. That classic Falcone/McCarthy chemistry on our screens. And this is exactly what we’re going to get in their new Netflix comedy series God’s Favorite Idiot. A limited series full of humor, weirdness, and sweetness and yes, a whole lot of swearing but it’s Melissa McCarthy swearing so it really doesn’t count.

Clark Thompson (Falcone) is a mid-level tech support employee, sweet and kind and ready to find love with his co-worker Amily Luck (McCarthy). The couple are heading out for their first date when Clark is waylaid by God, who chooses him as his messenger because the apocalypse is impending, Satan (played by Leslie Bibb) has arrived, and the world is coming to an end. Rotten timing for Clark and Amily, but they’re not giving up without a fight. Especially now that Clark is fully glowing with God’s message.

The trailer shows poor Clark getting hit by a bolt of lightning from God that leaves him glowing and Amily trying to help him figure out why. Or as she describes it at work the next day, “I saw something crazy last night, and I do want to just be completely open and honest. Yes, I did cocaine twice last week, but I did zero cocaine proceeding the event I'm about to describe: Clark was glowing.”

Their co-workers join in as well, and eventually they get an answer in the form of an angel played by Yannick Truesdale (Michel from Gilmore Girls). As the group try to ward off the coming apocalypse, even dealing with the Four Horsemen of the Apocalypse (or “Four Horsepeople” as one of their female members notes), Amily and Clark band together. She is tough while he is sweet and together they are the most charming combination of humans ever.

Exactly what the world needs to ward off evil.

The couple has a long history of working together.

Ever since their early careers in improv, Falcone and McCarthy, who are parents to 15-year-old daughter Vivian and 12-year-old daughter Georgette, have been collaborating on creative projects. Falcone, who created God’s Favorite Idiot, tends to either play smaller roles alongside his wife (as he did in Bridesmaids and The Heat) or he works behind the scenes as a writer for projects like Tammy and Thunder Force. This time around, however, the couple have finally taken the leap as the series’ leads in God’s Favorite Idiot, just like in real life. And we get to go along for the ride.

Announcing the series on Instagram, Falcone described it as a “new comedy created with love (and weirdness) by the Falcarthys.” He added, “Many thanks to the insanely talented (and also weird) cast and crew! Hope you like it!”

When does it come out?