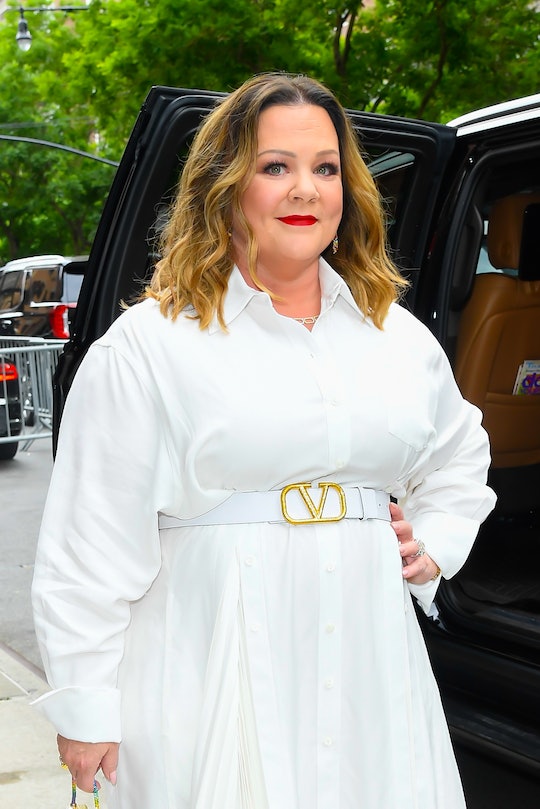 No better timing than that!

Melissa McCarthy is one of Hollywood’s most beloved funny actresses, willing to dive into physical comedy or put herself in compromising positions to get a laugh from the audience. But when it comes to parenting and talking about sex with her kids, she’s just as awkward as the rest of us. The Gilmore Girls alum, who shares daughters Vivian, 15, and Georgette, 12, with actor and comedian Ben Falcone, recently sat down for an interview and shared the hilarious story of her attempt to discuss the birds and the bees — while she happened to be cleaning up dog poop!

On an recent episode of Glennon Doyle’s We Can Do Hard Things podcast titled “Melissa McCarthy: Sex, Nuns & Ghosts,” the Emmy winner reflected on her childhood attending a Catholic school, and how it affected her ability to have open conversations with her kids.

“Like we've had the talk, which I did incredibly awkwardly because I knew it was gonna come. I always thought, I'm gonna do it so early because we're open about anything and they can come to me for anything,” she said. “But there is still a midwestern former Catholic person that's like, 'Talk about sex and a lightning bolt comes down.’”

But it wasn’t just the topic of the chat that was a bit awkward, it was the location and context of the conversation too. McCarthy revealed that she chose a “really wonderful” time — when she and her daughter were picking up after their pup in the backyard. As is often the case, McCarthy’s daughter seemed equally as uncomfortable her mom.

“Vivi just goes, 'Oh dear God, is this happening?' And I was like, 'There's different parts of bodies be it ... uh,' but at least I was just like, let me be awkward and get through it,” McCarthy said.

When she’s not busy breaking down the reproductive system, McCarthy is also all about building up her girls’ self-confidence. “I tell my kids all the time, like, you are the one that determines your self-worth,” McCarthy told Us Weekly. “Not what other people think of you.”

But it turns out that McCarthy isn’t the only parent to school her kids. Falcone is the author of a book about being a father called: Being a Dad Is Weird: Lessons in Fatherhood from My Family To Yours. In one chapter, the hilarious girl dad offers up his life-changing advice on what to do when kids are lounging around the house with nothing to do.

“Lately when they get bored or keep pushing for me to do something to entertain them, I will just look at them and calmly say, ‘Go outside.’ Somewhere along the line, I started to remember that the funnest games I used to play were the games I made up myself, or that my friends and I made up together. So I decided to try it with my kids, and it’s changed my life,” Falcone wrote in an excerpt shared in Men’s Journal.

Since Falcone has lots to say about the weirdness of being a parent, maybe he can take the next shot at having “the talk” with the couple’s youngest daughter next time. And maybe it can even inspire a follow-up book about the awkwardness of being a father too.