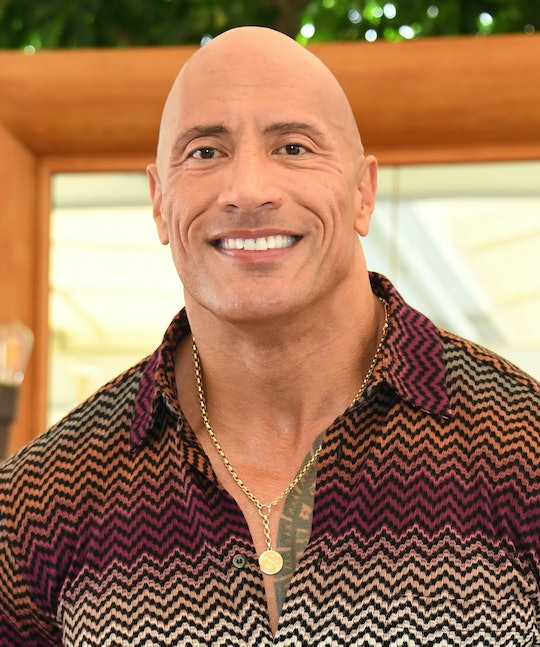 As one tweet described the moment, “passing your baby off like simba to the rock is so insane.”

Dwayne “The Rock” Johnson is a bonafide Hollywood superstar, macho action hero, proud girl dad, and of course known to your kids for voicing the character of Maui in Disney’s Moana. Well now the former wrestler and father of three can add a new item to his resume: baby catcher. Johnson recently shared a pretty shocking moment in Mexico at a huge outdoor event for his upcoming film Black Adam. When a dad in the crowd decided it would be a swell idea to crowd-surf his incredibly tiny infant across a sea of people and onstage into the arms of a ginormous celebrity, the only person who was apparently unsurprised is Johnson himself.

In a recent Instagram post, Johnson shared the jaw-dropping moment with his followers. “Our BLACK ADAM⚡️ Tour has been electric, fun and emotional. People do cry and they hand me things - I was NOT surprised to be handed this beautiful little baby❤️👶🏼😊.”

The actor’s post continued, “Her father caught my attention because he had tears in his eyes when he held her up high and gestured for me to hold her. I honestly thought he was holding a toy doll he wanted me to have as a gift. This beautiful, serene, present and trusting angel is Luciana. One day, I bet she’ll inspire all those around her. And whatever this moment meant for her emotional father - means it meant something special for me too. Love you back MEXICO and the mana is strong 🇲🇽❤️Girl dads ROCK 😉💪🏾.”

In the dramatic video, the baby is passed to several members in the crowd before she is handed to Johnson on the stage. “Oh my god. Wow,” Johnson whispered as he held the infant wrapped in a pink blanket and fans cheered in the background.

Now, it’s not surprising that Johnson shouted out his fellow daughter-doting fathers in the post. Johnson shares 6-year-old Jasmine and 4-year-old Tiana with his wife Lauren Hashian. He also has a 21-year-old daughter named Simone (who is following in his famous footsteps) from his first marriage. The Rock has opened up many times about his adorable relationship with his kids, sharing that his daughters are fascinated by his old wrestling videos, and he’s happy to be the target of their giggle-filled pranks. In addition to building his big ol’ muscles, he’s also big on building his daughters’ self-esteem.

Folks on social media, however, are not thrilled by this baby-surfing display. Luciana is after all, a teeny tiny baby, and she’s likely not a big fan of action movies either. Yet, that is.

Airborne babies aside, Johnson recently revealed that he is abandoning his political aspirations to focus on being an awesome dad instead. The Jumanji star recently sat down with CBS Sunday Morning and officially announced that he will not be running for office any time soon because his daughters are his biggest priorities.

“I will say this, 'cause it requires a B side to this: I love our country and everyone in it. I also love being a daddy. And that's the most important thing to me, is being a daddy, number one, especially during this time, this critical time in my daughters' lives,” Johnson said. “'Cause I know what it was like to be on the road and be so busy that I was absent for a lot of years when my first daughter's growing up in these critical age and this critical time in her life.”

So it’s settled. The Rock is focused on being a parent, first and foremost, even if that means catching a baby from a crowd.

More Like This
Over 10,000 Sippy Cups & Bottles For Toddlers Recalled Due To Lead Poisoning Hazard
Kim Kardashian Says She's "Shaken" By Balenciaga's Ad Campaign Featuring Children
Ryan Reynolds Jokes He "Should Sweep Or Something" To Get Prepped For Baby #4
Ryan Reynolds Was Asked If He's Excited To Be A Dad Of 4 & Obviously Cracked A Joke