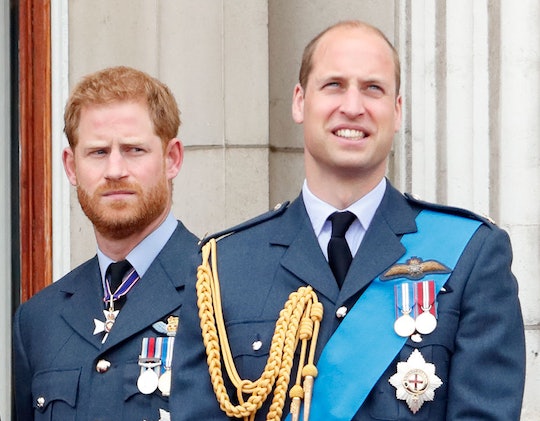 As A Mother Of Sons, I Desperately Want To Tell Harry And William To Knock It Off

Would that I could frighten them myself with my scary eyebrow. Unfortunately it only seems to work on my own sons.

I do not pretend to understand the relationship between Prince William and Prince Harry, their complicated history with each other, who said what to whom and why. I don’t understand why, for instance, Prince Harry calls his private parts a “todger” and his older brother “Willy.” These are mysteries I do not have the bandwidth to explore nor even really the inclination.

But here’s a little something I do understand: brothers. I have some, I raised some, I know some. And these two brothers need someone to tell them to get it together. Because being brothers is a lifelong gig.

If their mother Princess Diana was still here, I like to think she would have told her sons to knock it off or something vaguely more royal that means the same thing. Cut it out? That’ll do? Whatever she needed to say in that way of moms, where your one eyebrow gets all scary and you do the stop motion with the flat of your hand and use your most terrifying of voices. The voice moms use when we are frightened that our kids are giving up on each other. Because that is the worst thing for a mom, I think, when your kids give up on each other.

There is nothing I like better than how much my sons love each other, how they can come back to each other even when they’re fighting.

It has happened sometimes with my own sons, nothing life altering (so far), but there has been fighting, some of it terrible. There have even been physical fights that started out like a joke and ended with a broken cupboard door or a cut lip or ugly words — fights that seemed like they would end the brothers completely. Then out of nowhere, the clouds would lift, their faces would clear, and I could breathe again. They’ll carry on.

There is nothing I like better than how much they love each other, how they can come back to each other, even when they’re fighting. I think of when they played RISK together on summer afternoons at the little cottage we rented for a week near the beach. It was a violent, vicious, beautiful affair every single time, that had absolutely nothing to do with me. I’d read a book on the sofa and drink a cup of tea if it was raining and my background music would be one son screaming that he was breaking his allegiance with another son who invaded China, while a third son accused everyone of cheating, all of them calling each other’s honor into question. It would always sound like we were headed for pistols at dawn, but the reality was that there was always a payoff coming right around the corner — a laugh, an offer of a bag of chips, an invitation to go for a night swim. A break from the game, but never each other. Not really.

And this was the important part, the part I selfishly needed to see, the part I foster, even now that they’re men: Their love for each other. Their unabashed pleasure in each other, their vaguely twinny movements, their heads leaned in together, shouldering out the rest of the world. As toddlers, little boys, teenagers, and now men, they are each others’ constants. I see it in them, the way they are sometimes more each other’s brothers than my sons. And I will do everything I can to protect that relationship — remind them to call each other on their birthdays, to organize a weekend getaway for just the four of them. To prioritize each other in their lives along with their partners, their children, their dad, me. (Hopefully me.) And, perhaps most importantly, tell them to knock it off when the fighting gets out of control.

I see it in them, the way they are sometimes more each other’s brothers than my sons.

Like, say, if one of them wrote a whole book telling everyone that their brother was a bully. Oh boy would my one scary eyebrow be high up in the air if they ever did something like that.

Because you can’t take it back after it’s in a book, can you? You can’t un-tattle on your brother after the entire world has read about him pushing you down in a fight. Now you’ve invited all of us into the most complicated parts of your relationship and how will your brother feel about that? How do you come back to each other after such a thing?

Harry and Will’s mother is gone. We knew this of course, but I don’t think it’s possible to truly fathom how alone and traumatized those boys felt when it happened, how that pain has stayed with them. And a measuring force, the person who adored them equally and above all else, who can nag them until one or both of them finally relents with a sigh and an “OK!” is exactly what is needed in this situation between these broken princes. And that person is gone.

Would that I could frighten them myself with my scary eyebrow. Unfortunately it only seems to work on my own sons.