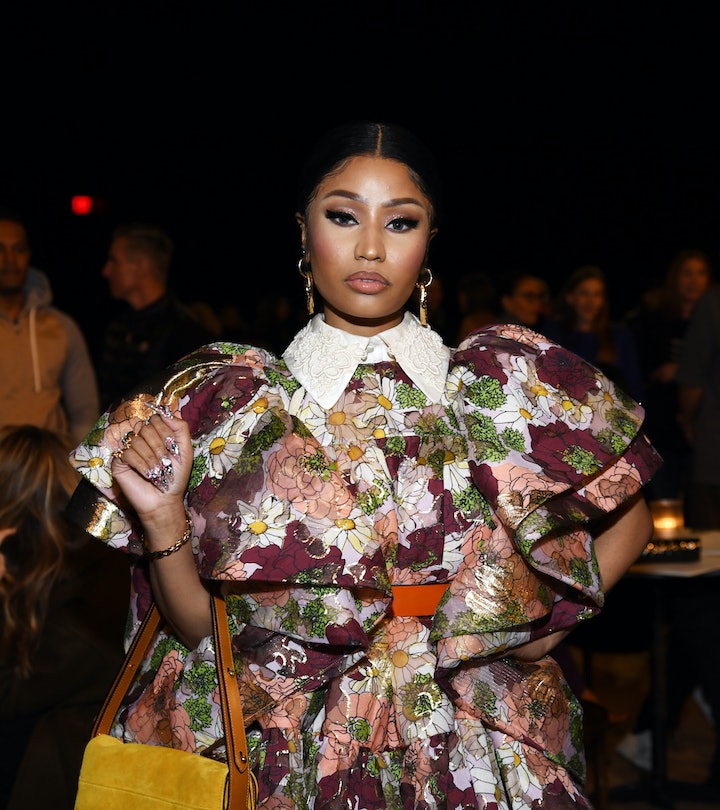 “Papa Bear thank you so very much for choosing me to be your mama."

It's the moment Barbie fans have been waiting for since we saw those teeny, tiny baby toes. Yup, roughly three months after his birth, Nicki Minaj shared the first pictures of her baby with her husband Kenneth Petty on Instagram and boy oh boy, he's adorable. And not only did the new mom post photos of her newborn son's face for the first time since his arrival, she also provided a peek at his swanky wardrobe.

While Minaj shared a glimpse of her baby's foot back in October, shortly after she gave birth on Sept. 30, the “Megatron” rapper rang in the new year by sharing six adorable pictures of her 3-month-old son on her Instagram on Jan. 2.

In the photos, Minaj's baby boy is wearing in a variety of stylish outfits, including Versace and Fendi onesies, and a blinged-out chain with a diamond nameplate that says, "Papa Bear." The Fendi onesie is part of a larger Fendi gift, that includes a designer stroller, teddy bear, diaper bag, and outfit sets he got for Christmas. Sure, her baby boy might not be crawling yet, but he's already following in his mom's fashionista footsteps.

"#PapaBear thank you so very much for choosing me to be your mama," Minaj captioned the photos shared on Instagram. "Wishing you guys a happy & prosperous New Year. Thank you for your love & support throughout this journey. It’s meant so much to me."

"Becoming a mom is by far the most fulfilling job I’ve ever taken on," she added. "Sending love to all the superhero mothers out there. Big hugs to all the women who have been pregnant during this challenging time."

While Minaj has not yet revealed the name of her son, Entertainment Tonight reported that she shared during an interview that his name was almost "Ninja," but she changed it at the last minute.

As she and her little Papa Bear settle into the new year, Minaj is also preparing for the release of her HBO Max docuseries. The title and release date of the six-hour docuseries has not been announced yet, but it will dive into her personal life, including her pregnancy journey. Hopefully, it will include more precious photos of her son.