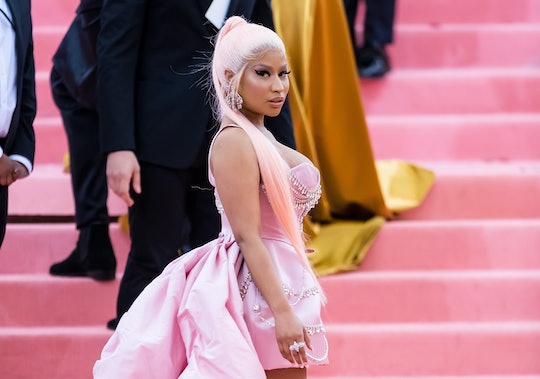 Three months after welcoming her first child, Nicki Minaj has shared details about her son's birth and got candid about her struggles with breastfeeding.

While rapper, who welcomed her son in late September with her husband Kenneth "Zoo" Petty, has not yet announced her baby's name or posted a picture of his face, she has opted to share a few details about the day he was born.

During a Q&A session on Twitter on Dec. 30, Minaj revealed that she was "butt naked" as she had just gotten out of the shower when her water broke. "I was weirdly calm and I quietly said 'oh my God I'm about to be in labor.' He was very scared and I was laughing at him," she shared on Twitter.

When it came time to finally deliver her son, Minaj revealed that she gave birth vaginally, with an epidural, and pushed for two-and-a-half hours after being in labor all night. "Only because the epidural didn't wear off enough for me to feel myself pushing," she wrote. "Once I was able to feel the pain, I pushed him out."

Ahead of giving birth herself, Minaj shared that singer and mom-of-three, Ciara, was "sooooooo helpful" when it came to giving advice. The rapper also revealed that Ariana Grande sent some gorgeous gifts when she found out Minaj was pregnant.

While her son had "no problem" with breastfeeding, Minaj said that she was surprised by how painful it was for her. "He latched on in the hospital which was very surprising to me. I was afraid maybe he wouldn’t. But breast feeding is very painful. Pumping is too," she tweeted. "Women make this stuff look way too easy. Moms r really superheroes."

And although she is keeping her son's face hidden for now — and wouldn't reveal which parent he resembles more — she did give some insight into his rambunctious personality. "He used to kick me so hard every night at the same time if I didn't get up and walk with him," she wrote on Twitter. "He had a full personality in my tummy and knew how to get his way. It was so intriguing to me. He does the same thing now."

Hopefully it's only a matter of time before fans get to see her little one with a "full personality," especially since they've already heard a snippet of his sweet little voice.