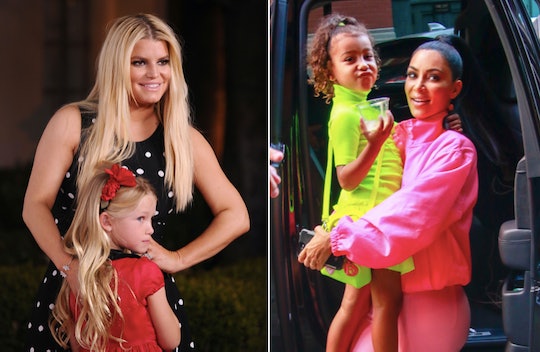 These two probably have plenty to talk about.

Before we were Keeping Up With The Kardashians we were all about Newlyweds: Nick and Jessica. Nick Lachey and Jessica Simpson, that is, whose marriage from 2002 to 2006 became the subject for one of the original reality series on MTV. So it makes a sort of sense that Kim Kardashian’s 8-year-old daughter North West would be friends with Simpson’s daughter Maxwell. They are part of the same world, in a way. Even if they might be too young to realize it.

Simpson spoke to Us Weekly about her 9-year-old daughter Maxwell’s friendship with the super famous young reality star. “One of Maxwell's best friends is North,” she explained to Us Weekly while discussing the possibility of doing another reality series. “And so, watching North, she is amazing, she is a great kid, and she will be a part of the change in this world. Her and Maxwell alone.”

So how did these two little powerhouses meet? It seems Simpson’s husband, retired NFL player Eric Johnson, had a hand in things. “Eric coached North in basketball just recently so, it's been fun because we live in the same neighborhood. So, it makes it easy,” Simpson told Us Weekly.

The two girls certainly have a lot in common; they are both children of reality stars, of course, and both children of musical performers as North’s dad is, of course, Kanye West. They both have a very specific sense of style and they’re not afraid of sharing it; Maxwell started a trend in 2019 when she colored her hair blue at just 7 years old, and North made waves at a recent Vogue photo shoot when she insisted on styling her whole family.

While Maxwell and North have a lot in common, including younger brothers and sisters, they might not be co-starring in any reality series any time soon. When asked if she would let cameras into her home again, Simpson told Us Weekly, “No, not as a reality show. I feel like, as a family, I would never want to put that pressure on my kids to always feel like they have to be on.”

She does have a lot of respect for the Kardashians and their staying power on a reality series, however. “I’m like, ‘I don’t know how y’all could do this all the time,’” Simpson added. “I could only last three seasons, but they’re so open and they’ve always remained the same. That’s really hard to do, and they’re powerhouses.”

Two little powerhouses Maxwell and North. Maybe that’s a reality series for the next generation.