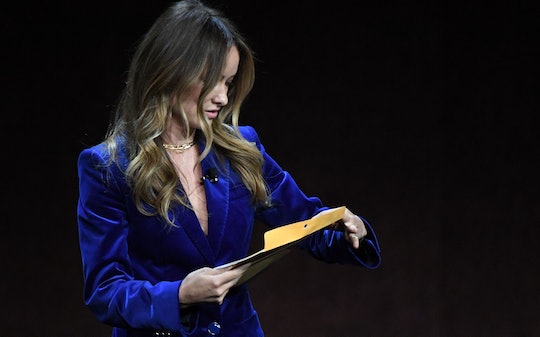 The Ted Lasso star apparently had “no prior knowledge” about the moment that’s gone viral.

An unnamed woman handed Olivia Wilde a mysterious manilla envelope while she was giving a speech on stage at CinemaCon in Las Vegas to promote her new movie Don’t Worry Darling, starring her boyfriend Harry Styles. The envelope was marked “private and confidential” and reportedly contained custody papers from her ex-fiancee, Jason Sudeikis. It was a surreal moment, and one Sudeikis was apparently unaware was happening.

Wilde opened the large envelope on stage, thinking it was a script, but Deadline reported on Wednesday that the envelope she was given was from Sudeikis and contained custody papers pertaining to the former couple’s two children. After she opened it and briefly read the paper, Wilde said, “OK, got it. Thank you.”

A source close to the Ted Lasso actor explained to Variety that the dad of two had no idea she would be served so publicly. “Papers were drawn up to establish jurisdiction relating to the children of Ms. Wilde and Mr. Sudeikis,” the source told Variety. “Mr. Sudeikis had no prior knowledge of the time or place that the envelope would have been delivered as this would solely be up to the process service company involved and he would never condone her being served in such an inappropriate manner.”

Romper has reached out to reps for both Wilde and Sudeikis for comment.

Sudeikis and Wilde separated in 2020 after seven years together, and have since been co-parenting their 8-year-old son Otis and 5-year-old daughter Daisy. Naturally, a separation that involves children comes with its own special set of circumstances, and in this case it could be even more complicated as Sudeikis spends much of his time in the U.K. filming Ted Lasso.

While Sudeikis reportedly had no knowledge of Wilde being served as she promoted a movie she is directing, the timing does appear to be incredibly unusual. Perhaps especially since Don’t Worry Darling stars Styles, the person Wilde has reportedly been romantically involved with since the couple’s separation. Why anyone would think this was a good time to serve a mom custody papers is a mystery.

Here’s what we do know for sure: Both Sudeikis and Wilde love their two children. They both want the best for them. We know that ending a relationship is tough, especially with kids and especially when it’s so public.

More Like This
Meghan & Harry Celebrated Their Anniversary As A Family Of Four For The First Time
MGK Shared An Emotional Tweet After Dedicating Song To “Wife” & “Unborn Child”
13 Celebrity Parents Who Also Raise Chickens At Home
Jennifer Lawrence Just Kinda, Sorta Revealed The Sex Of Her First Baby