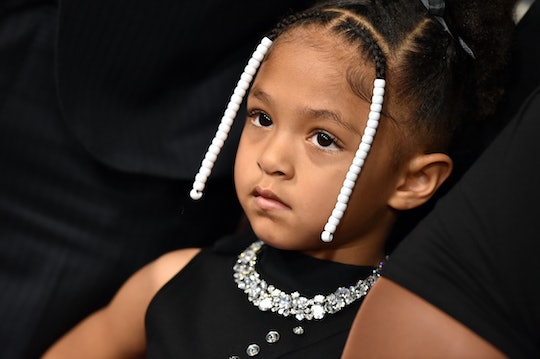 Olympia Ohanian is starting to handle the tennis rack like her mother, tennis legend Serena Williams. The 4-year-old showed off her impressive tennis skills in a new Instagram video posted on her page on Monday and all we can say is wow.

“Practice makes progress,” the caption read. In it, the toddler demonstrates her strong backhand swing that levels up with some veteran tennis players such as her aunt Venus Williams, who commented under the video, “It’s Oracene all over again!,” referring to their mother, who coached the girls, along with their father, Richard Williams, when they were younger.

Another viewer commented, “Not her backhand already looking better than mine.”

“I’m not an expert, but that looks like a very promising backhand,” another viewer wrote under the video.

Others are already comparing Olympia’s skills to her Grand Slam mother’s, as one viewer observed, “She hit that like her mommy!”

Olympia, whom Williams shares with her husband, Reddit co-founder Alexis Ohanian, has been playing the sports for a few years now. In 2020, Williams revealed that she signed her daughter up for tennis lessons. And since then, the mother-daughter duo has been spending more and more time practicing on the tennis court together.

Not only does Olympia have a promising tennis swing, she is also a virtuoso. In a September 2021 video shared on TikTok, Olympia showed off her piano skills. Her mother captioned the video, “I teach her tennis, she teaches me piano.”

Williams later told Jimmy Kimmel during her November 2021 appearance, “I have a baby Mozart, [but] of course every parent thinks they have like, a baby Beethoven or whatever.”

So whether she decides to take the tennis route, music, or something completely different, it’s clear that the opportunities and potential for little Olympia are endless!