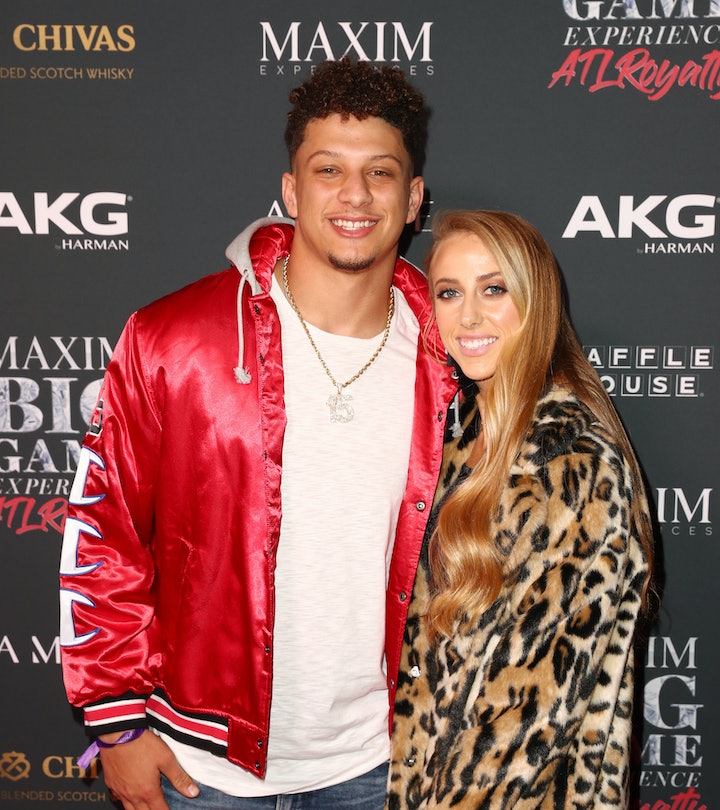 A Look Back At Brittany Matthews' Best Pregnancy Photos

Kansas City Chiefs quarterback Patrick Mahomes and his fiancée are officially parents to a little girl.

Kansas City Chiefs quarterback Patrick Mahomes and his fiancée Brittany Matthews are officially parents to a sweet baby girl. But leading up to their daughter's birth on Feb. 20, Brittany Matthews shared many pregnancy photos that highlight just how excited they were to finally meet their little one.

“Sterling Skye Mahomes,” the couple captioned the same photo of their daughter’s hand resting on Matthews’ chest to their Instagram feeds on Sunday. The couple shared that their daughter was born on Feb. 20, weighing 6 pounds and 11 ounces.

The high school sweethearts have had one very exciting year. Not only did Mahomes play in the Super Bowl against the Tampa Bay Buccaneers, but the couple welcomed their first child weeks after. Matthews announced her pregnancy in September just weeks after they got engaged. "Mom and Dad, taking a small detour to the wedding," Matthews captioned the Instagram post.

While speaking to reporters in September, Mahomes shared his happiness over becoming a dad. "Being able to grow up and have these dreams of having a family and playing in the NFL, and for that have stuff to start happening and everything like that, it's really cool," he said.

Matthews' pregnancy photos show that happiness, and all of the exciting memories that are to be made with Sterling.

Both Mahomes and Matthews shared the same photo of them, holding their daughter’s hand, resting on Matthews’ chest. The new mom also wore her a necklace bearing her daughter’s name.

The name Sterling is of English origin, according to Nameberry, and means “of the highest quality.” Her middle name, Skye, is of Scottish origin, and is very reminiscent of nature. While Sterling is Mahomes and Matthews’ first child, they are already the parents to two “fur babies,” their dogs Steel and Silver Mahomes. Sterling’s name fits perfectly into their super solid family.

Sitting On The Sidelines

Their daughter will be attending a lot of football games in her future. In fact, she already has in the womb. Matthews has been posting so many photos of her at football games, cheering on her fiancé while rocking the cutest maternity style (in Kansas City Chiefs colors, of course).

"Just so dang proud of you," Matthews captioned a photo of Mahomes holding her bump after he secured the AFC title.

Over the past few months, Matthews has been showing off her football game style. Whether she's dressed down in casual joggers or dressed up in a skirt, she is always sure to show off her Kansas City pride while sporting her fiancé's number and the team's colors: red, gold, and black.

It's safe to say that her Super Bowl style is going to be amazing.

Matthews shared the most gorgeous pregnancy photos in January wearing a pink gown while standing against a stunning floral background. Although most of the couple's life revolves around America's favorite pastime, there isn't a football in sight.

In December, Matthews celebrated their baby's soon-to-be arrival with a pink and white themed baby shower, which she posted photos from on Instagram. Matthews wore another long, pink dress, while posing underneath an elaborate balloon arch.

Matthews spent the day celebrating with friends and family in Texas, according to People, who all got tested for coronavirus beforehand. "Thankful to have amazing close friends and family that will stay safe for the sake of me and baby girl," she captioned one photo, posted on her Instagram Story before the shower, as People reported.

While the 25-year-old posts photos of her bump all dressed up, she has also nailed the cute and casual maternity style.

Matthews often rocks a pair of leggings, featuring her cute bump, of course.

Matthews is a former college soccer player and certified personal trainer, who has developed her own pregnancy workout guide. So of course, Matthews has continued to post photos and videos of her maternity workouts to Instagram throughout her pregnancy.

Whether she's targeting her legs or glutes, Matthews works out in style.

On and off the field, Matthews and Mahomes have shown their love for one another and their daughter on the way.

While Mahomes might be a quarterback for the Kansas City Chiefs, he is also her "fiancé, baby daddy, dog daddy, and best friend," she wrote in the caption of an Instagram post.

The only thing that would make this soon-to-be-family-of-three complete is another Super Bowl ring.

This article was originally published on Feb. 6, 2021