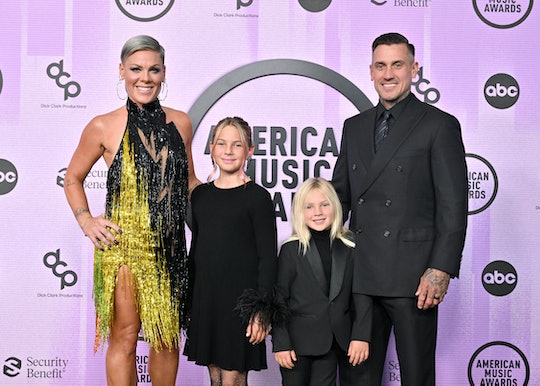 The entire family dressed to the nines!

Pink was back at the American Music Awards this weekend after five years away, and it was a massive triumph. Not just because the singer wowed the audience with her rendition of “Hopelessly Devoted To You” in honor of the late Olivia Newton-John, but also because of her dates at the ceremony. Pink brought both of her kids and her husband to the AMAs, and it was incredible to see how much they’ve grown.

The “Just Like Fire” singer walked the red carpet at the AMAs alongside her 11-year-old daughter Willow and 5-year-old son Jameson as well as husband Carey Hart on Sunday. It was a big moment for Pink, she noted on Instagram, for several reasons. Because she hadn’t attended the AMAs for five years, but also because she was slated to honor Newton-John by doing her own rendition of “Hopelessly Devoted To You.” Fortunately for Pink, she had her very own cheering squad along with her. And one member of her little family cheering squad was especially invested in her performance. Daughter Willow, who had a big hand in helping her mom prepare for her performance.

Pink told Jimmy Kimmel in a recent interview that Willow was an integral part of helping her get ready to sing at the AMAs. “My daughter did Grease last summer and she’s teaching me the songs,” Pink explained. “But Willow’s a gnarly teacher.” Especially when it comes to knowing the lyrics of Newton-John’s iconic song. “I made a bet with her once [about forgetting my lyrics]. She’s like, ‘That’s not the words.’ And I was like, ‘I wrote it!’ … And we went back and she won. It’s tough.”

The entire family looked great all dressed to the nines, but the evening was not without its wardrobe malfunctions. Namely Carey Hart dealing with his pants ripping right before the show. “The a** blew out of my pants,” he said in a hilarious video of the family on Instagram.

Willow is no stranger to awards shows and performing. She joined her mom on stage at the 2021 Billboard Music Awards, where they pulled off a stunning acrobatic performance together with son Jameson in the audience. Later in the show, Pink gave both her kids a shout out when accepting the Billboard Icon Award, “Willow nailed it. Jameson, nailing it,” she said. “I love what I do and I love the people that I get to do it with.”

Having her whole family in the audience can’t hurt either.