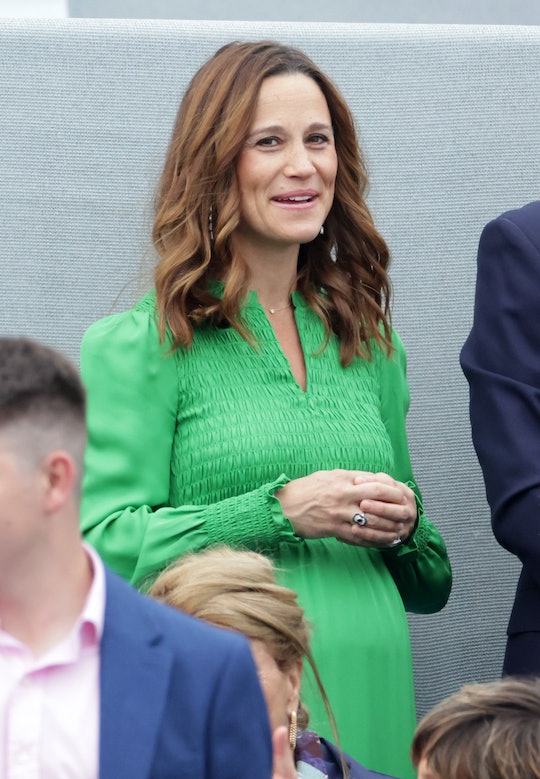 She had the most adorable baby bump at the Party at the Palace concert Saturday night.

Congratulations to Pippa Middleton and husband James Matthews, who are expecting their third baby! Kate Middleton’s younger sister debuted her baby bump at the Party at the Palace concert at Buckingham Palace on Saturday, part of Queen Elizabeth II’s Platinum Jubilee celebrations. Middleton was all smiles in a bright green dress that hugged her growing baby in pictures from the event.

If the pregnancy glow and the two hands clasped over her stomach weren’t enough to confirm the news, multiple sources confirmed the pregnancy to People. This will make Baby #3 for the couple, who are already parents to Arthur, 3, and Grace, 1. The columnist and hedge fund manager husband got married in 2017.

The couple is “so happy,” a source told Page Six about the baby news, adding that Middleton is a “natural mama.” In the past, an insider told Us Weekly about Middleton and Matthews, “Starting a family is something they’ve spoken about since long before they got married. They added, “Pippa’s always said how great it would be if [her and Kate] were to be expecting together.”

At the event on June 4, the Duchess of Cambridge’s brother James Middleton and his wife Alizée Thévenet were also present, along with her parents Carole and Michael Middleton. Prince William, Kate, and their three kids, Prince George, 8, Princess Charlotte, 7, and Prince Louis, 4, were sitting in the nearby royal box. The exclusive concert featured musical acts Queen, Diana Ross, Elton John, Duran Duran, and Rod Stewart.

There is no word yet on the baby’s sex or due date. The couple will probably keep the information a secret because they are “extremely private,” according to Matthews’ brother, Spencer Matthews, who revealed in 2018 that the couple kept those details hidden with their first pregnancy. But it is likely that Middleton will deliver at St. Mary’s Hospital when the time comes, like she did with her first two kids. This is the same hospital her sister, Kate, gave birth to her three kids as well.

Luckily for Middleton, her older sister can fill her in on all the joys — and challenges! — that come with being a mom of three.

More Like This
You’ve Probably Been Pronouncing “Lilibet” All Wrong
Patrick Mahomes & Brittany Matthews Reveal They're Expecting A Baby Boy In Sweet Video
Prince Charles Got All Mushy When He Met Lilibet For The First Time
Meghan Markle Calls On Men "To Be Vocal" In The Aftermath Of Roe v. Wade Ending