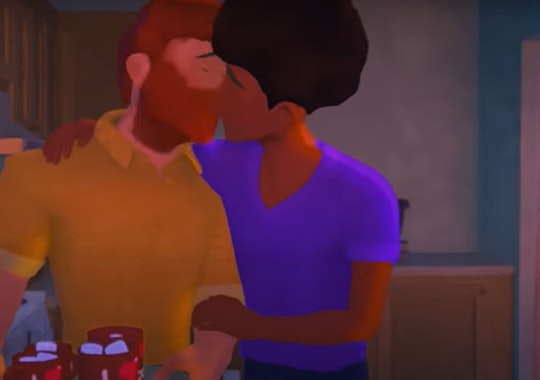 Everyone Can Watch Pixar's Short Out For Free On YouTube

Yes, you’ll be weeping in just under 9 minutes.

While only those with a Disney+ subscription could watch Out — Pixar’s 2020 SparkShort about a young gay man coming out to his parents, with the help of a furry, four-legged cosmic interference — everyone can now watch it for free! In honor of Pride Month, Pixar has released the full 9-minute-long short film on YouTube.

Pixar released Out on YouTube on June 9, along with a quick introduction from director and writer Steven Hunter as well as producer Max Sachar. According to the creators, the short film is actually based on a true story, inspired by Hunter’s upbringing and coming out experience.

“This is sorta like a gay twilight zone,” Hunter said. “You sit down and try to tell your own story and you quickly realize, you’re like ‘Wow, I’ve never drawn two guys hugging one another and talking about love.”

Sachar called his involvement in the short film one of the more “rewarding experiences” of his life. “Not just in my career, but in my life,” he added.

Described as a celebration of family and love, Out opens in a very Pixar way: A magical pitbull and kitten, who are actually from Pixar’s equally emotional short, Kitbull. The animals roll in on a rainbow and send a purple, magical bubble to the dog of Greg, voiced by Brave’s Kyle McDaniel. The short follows Greg, who has a boyfriend named Manuel, as he struggles with coming out to his parents. But in a cosmic twist, Greg magically switches bodies with his dog, Jim. The out-of-body experience eventually gives Greg the confidence to introduce Manuel to his parents, who welcome him with open arms.

While Out has been available to stream on Disney+ with a subscription, which starts at $8 a month, you can also stream it for free on YouTube and send it to all your loved ones. Sachar said in the intro he hopes everyone will find relatability to this story. “I think we all will find a personal connection,” he said. “Just the way we communicate with our parents or our loved ones or with our friends.”