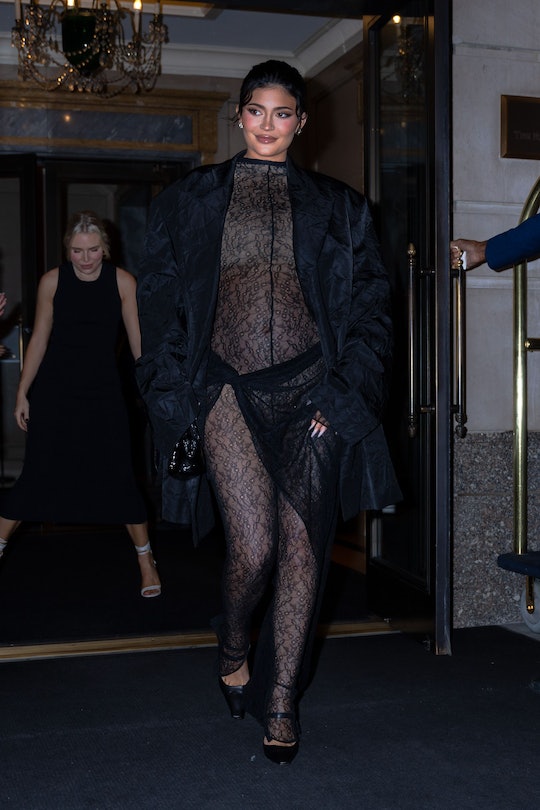 From jumpsuits to crop tops, Kylie Jenner has been taking her maternity style to the next level during New York Fashion Week. The 24-year-old Kylie Cosmetics founder confirmed earlier this week that she’s pregnant with her second child and, just days later, made a grand entrance when she stepped out in a stunning see-through black lace jumpsuit.

On Thursday, Jenner was photographed in the jumpsuit, which she paired with a long black oversized blazer with matching heels. Earlier that day, she was spotted wearing dark denim jeans, a crop top, and a long orange leather jacket at the Revolve Fashion Show. “So excited to support my friends @revolve on their amazing New York Fashion Week presentation,” she captioned her crop top outfit pictures on her Instagram.

Both outfits put her growing belly in the spotlight. The former Keeping Up with the Kardashians star and Travis Scott are currently expecting their second child together. A few weeks after media outlets like People and TMZ reported on her pregnancy, Jenner confirmed the news in a sweet 90-second video that showed her holding up a positive pregnancy test and the proud parents attending an OB-GYN appointment with their 3-year-old daughter, Stormi.

A source told Entertainment Tonight that Jenner is excited about being a mom of two and starting a new chapter with Scott and their daughter. “Kylie can’t wait to be a new mom again,” the source told the outlet. “She feels like she was born to be a mom and can’t wait to start another chapter of her life with Stormi and Travis by her side.”

Scott and Jenner, who got back together recently after splitting in October 2019, have also been preparing Stormi to take on her big sister role. “They are making sure she knows how loved she is and preparing her to be a big sister by keeping her very engaged,” the same source told Entertainment Tonight.

Perhaps part of the preparation will include a few mommy and me looks as they wait for their family’s newest addition to arrive. After all, Stormi is already a little fashionista like her mom.