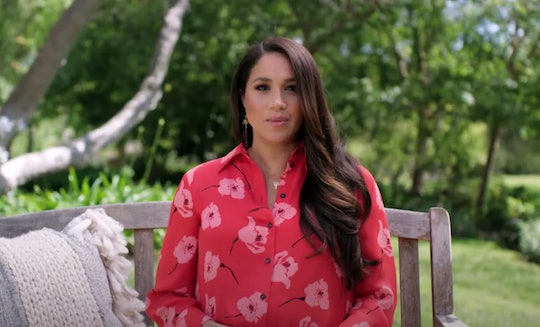 Meghan Markle Spoke About Her Daughter During Her Latest TV Appearance

“My husband and I are thrilled to soon be welcoming a daughter.”

Meghan Markle is just months away from welcoming her second child, a baby girl, with Prince Harry, and she’s already making big plans for her daughter’s future. During a new TV appearance, the Duchess of Sussex spoke about her daughter and just how important it is to make the world a safer place for future generations.

During the nearly two hour long broadcast of Global Citizen’s VAX Live: The Concert To Reunite The World on Saturday, celebrities and global leaders spoke at length about the importance of distributing COVID-19 vaccines equally to citizens across the world. Markle and Prince Harry served as campaign chairs for the special and the duchess made pre-taped appearance near the end.

While talking about the impact that equal vaccine distribution, Markle mentioned her daughter, who is due sometime this summer and will make the couple’s 2-year-old son, Archie, a big brother.

“My husband and I are thrilled to soon be welcoming a daughter,” she said. “It’s a feeling of joy we share with millions of other families around the world. When we think of her, we think of all the young women and girls around the globe who must be given the ability and the support to lead us forward. Their future leadership depends on the decisions we make and the actions we take now to set them up, and all of us up, for a successful, equitable, compassionate, tomorrow. We want to make sure that as we recover, we recover stronger. That as we rebuild, we rebuild together. Thank you.”

You can watch a clip of her full speech on Twitter, or rewatch the entire VAX Live special on YouTube.

“As campaign chairs of VAX Live, my husband and I believe it’s critical that our recovery prioritizes the health, safety, and success of everyone, particularly women who have been disproportionately affected by this pandemic,” she said at the beginning of her speech.

“Women, and especially women of color, have seen a generation of economic gain wiped out. Since the pandemic began, nearly five-and-a-half million women lost work in the U.S. and 47 million more women around the world are expected to slip into extreme poverty,” Markle added.

Prince Harry also made an in-person appearance at the concert, which was held in Los Angeles on May 2, where he talked about the dangers of politicizing science. “I understand why people are confused, or sometimes don’t know what to think or believe about vaccines,” the Duke of Sussex said.

“We are experiencing a viral pandemic, alongside a digital pandemic. And much like the virus, there are no borders online. So when vaccine misinformation and disinformation spreads, magnified on social media and in parts of traditional media, it exposes a collective threat to humanity. As long as nations struggle with COVID-19, we all struggle with it.”