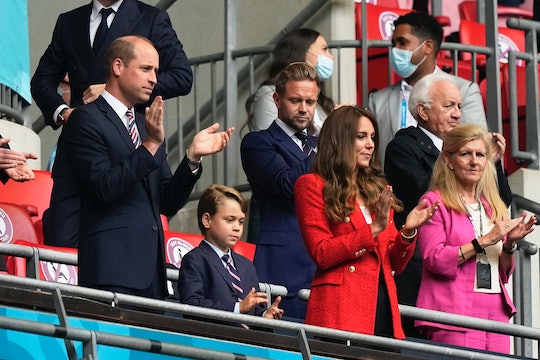 Princess Charlotte and Prince Louis must’ve been fuming at home...

One of the great joys of childhood when you have siblings is getting one-on-one time with your parents. Whether you are a regular kid or a future king, doesn’t matter — it feels like a treat. Certainly Prince George looked proud during his day out with his parents, Prince William and Kate Middleton, on Tuesday. Perhaps especially because he was also at a soccer match, one of his favorite pastimes.

The 7-year-old heir to the throne got all dressed up in a suit and tie to match his dad for an outing to watch England play soccer against Germany in the Euro 2020 Championships at Wembley stadium. It was a high stakes game, as the team that won will now head on to the quarterfinals. Which could be the reason Prince George looked so serious in photos, standing and singing the national anthem, “God Save The Queen,” alongside the Duke and Duchess of Cambridge. That must feel weird, since Prince George and his siblings, 6-year-old Princess Charlotte and 3-year-old Prince Louis, actually just call the Queen “Gan-Gan.” She is, after all, their great-grandmother, but you can’t really sing “God Save Gan-Gan,” I guess.

Prince George really perked up by the end of the game along with his parents when England won against Germany 2-0. He is a pretty serious “football” fan. He and his dad both support Aston Villa, and last year Prince William bragged a little about his son’s own skills on the soccer pitch during a visit to The Peter Crouch Podcast, "I reckon he could be their all-time leading scorer,” he said when asked if Prince George could one day play for the team, “I can see no reason why not. It would be brilliant."

The entire outing looked like a fun event for the whole family. Although one can’t help but picture little Princess Charlotte and Prince Louis fuming at home, plotting their revenge because their brother got such a special treat. Such is the way of siblings.