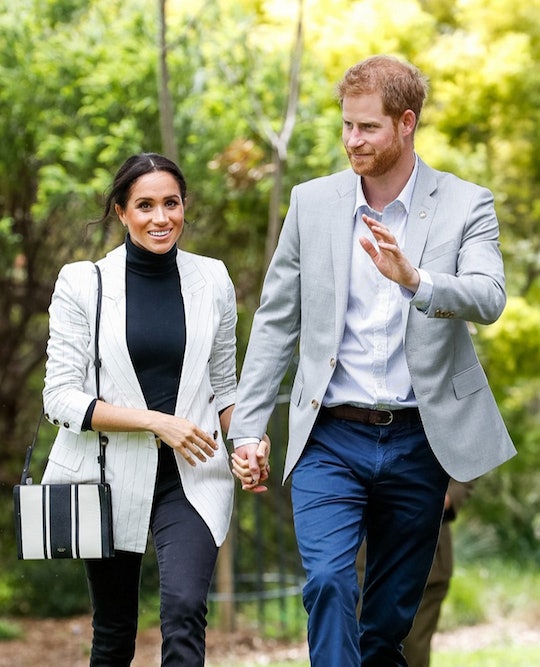 Archie does the running, Lillibet does the sleeping.

It’s been a little less than a month since Prince Harry and Meghan Markle welcomed their second child, but they’re already getting very acclimated with having two little ones taking over the house. And while they’re surely pretty tired these days, according to Prince Harry himself, their newborn daughter Lilibet is pretty relaxed.

The Duke of Sussex made a surprise appearance at the 2021 WellChild Awards alongside Ed Sheeran in London on Wednesday. During the garden party, Sheeran, who welcomed his daughter, Lyra, last year, asked how the Duke of Sussex was holding up. “You’re still in the trenches now!” Sheeran reportedly exclaimed, according to Hello!. “How do you manage the two?”

“Two is definitely a struggle,” Harry, who is also the dad to 2-year-old son, Archie, with Meghan, replied.

Harry and Meghan privately welcomed their second child and first daughter, Lilibet “Lili” Diana Mountbatten-Windsor into the world on June 4. And while Harry admitted that he is perhaps a bit tired, he reportedly told another guest later on in the party that Lili is a pretty relaxed baby, according to Hello!. “We’ve been lucky so far, she’s very chilled and seems happy to just sit there while Archie is running around like crazy.”

Yep, that sounds like a pretty accurate older brother and younger sister dynamic.

During the award ceremony, Prince Harry opened up about how having two children has changed his perspective. “Now, as a father of two, I feel all the more connected, inspired, and in awe of the resilience of these families, who power through indescribable challenges with the support of WellChild,” Prince Harry said during his speech, according to Us Weekly.

This really has been the first time that Prince Harry has opened up about her daughter since her birth. Just days following Lili’s birth, the couple released a statement, saying that “both mother and child are healthy and well, and settling in at home.” “The Duke and Duchess thank you for your warm wishes and prayers as they enjoy this special time as a family,” the statement read.

Hopefully he continues to talk about his happy baby and active toddler in the future.