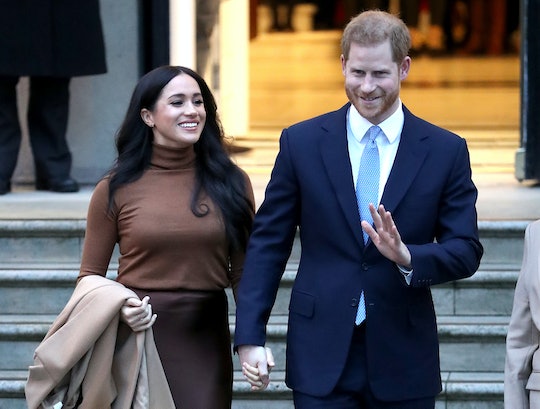 Meaning, Lilibet may never get to meet the queen she is named after.

Prince Harry is pushing back on a Home Office decision to deny him police protection while in the United Kingdom. While the Duke of Sussex stepped down from his senior role within the royal family and moved to the United States in 2020, he still wants his children to be close to his family and know his home country. But in a recently issued statement, Prince Harry revealed he’s effectively been blocked from bringing his children to the United Kingdom to visit with their great grandmother by the Home Office’s refusal to allow him access to police protection even if he pays for it out of his own pocket.

“Prince Harry inherited a security risk at birth, for life,” a legal representative for the Duke and Duchess of Sussex said in a statement issued after the Mail on Sunday leaked news of duke’s decision to seek a judicial review. “While his role within the Institution has changed, his profile as a member of the Royal Family has not. Nor has the threat to him and his family.”

According to the representative, the Duke and Duchess of Sussex currently pay for a private security team to protect them and their two children, 2-year-old Archie and 7-month old Lilibet. But according to the BBC, Prince Harry has argued his private security team isn’t able to provide the same level of protection that UK police can (or that would be needed to fully protect his family from potential threats when in the UK), given they don’t have the access to local intelligence or the legal jurisdiction as the police do.

What’s more, the Home Office has reportedly not only denied Prince Harry’s offer to personally pay for UK police protection for himself and his family but also denied his request for protection outright.

“In the absence of such protection, Prince Harry and his family are unable to return to his home,” the statement read.

That likely means Prince Harry, Meghan Markle, Archie, and Lilibet won’t be present for the Queen’s Platinum Jubilee celebrations, which will mark her historic 70 years on the throne in June. It also means young Lilibet may never get to meet the woman she is named after face-to-face.

In September, Prince Harry challenged the Home Office’s decision by filing an application for judicial review. In his application, Prince Harry cited an incident where paparazzi chased him as he left a charity event in London in July 2021.

“The goal for Prince Harry has been simple — to ensure the safety of himself and his family while in the UK so his children can known his home country,” the statement from the Sussex’s representative said. “He remains willing to covert cost of security, as not to impose on the British taxpayer... The UK will always be Prince Harry’s home and a country he wants his wife and children to be safe in. With the lack of police protection, comes too great a personal risk.”