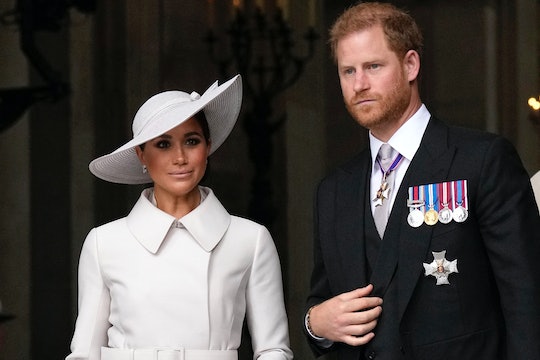 When Queen Elizabeth died at the age of 96 years old at Balmoral Castle on Thursday, she was surrounded by family. Her children, including the newly sworn-in King Charles III. And her grandchildren, including both Prince William and Prince Harry, who was already in the UK to attend a charitable event and redirected to Scotland after receiving news that his grandmother was ill. Now, he and wife Meghan Markle have paid tribute to Britain’s longest reigning monarch.

The Duke and Duchess of Sussex took to their Archewell Foundation website in the hours after Buckingham Palace announced Queen Elizabeth’s death with a simple message. “In loving memory of Queen Elizabeth II. 1926-2022.” The couple’s simple message was written on a black background, while access to the site has been temporarily paused.

This is not the first time the couple have written a tribute to a lost family member on their website. When Queen Elizabeth’s husband of 73 years, Prince Philip, died in April 2021, Prince Harry took to Archewell to share a beautiful tribute to his grandfather. “He will be remembered as the longest reigning consort to the Monarch, a decorated serviceman, a Prince and a Duke,” he wrote at the time. “But to me, like many of you who have lost a loved one or grandparent over the pain of this past year, he was my grandpa: master of the barbecue, legend of banter, and cheeky right 'til the end.”

That kind of touching tribute takes time to write, time neither Prince Harry nor Meghan Markle have yet had to process the loss of such an inspiring woman. A woman they both cared for so deeply that they named their 1-year-old daughter after her, Lilibet “Lili” Diana, a tribute to a nickname bestowed on Queen Elizabeth by her own father King George VI when she was a child.

Prince Harry was not the only member of the royal family to share a tribute. King Charles III shared a statement in the wake of his mother’s death, writing, “We mourn profoundly the passing of a cherished Sovereign and a much-loved Mother. I know her loss will be deeply felt throughout the country, the Realms and the Commonwealth, and by countless people around the world."

More tributes are sure to come in the days, weeks, and months ahead. Queen Elizabeth’s death will be felt by millions. But especially by those who loved her best.