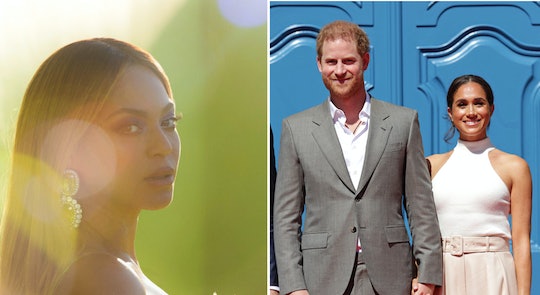 Prince Harry's Reaction To Beyoncé Texting Meghan Markle Is Everything

It had everything: enthusiastic jazz hands, a dramatic gasp, and the Duke of Sussex saying, “Shut up!”

Back in September 2020, mere months after Prince Harry and Meghan Markle moved to the United States and less than a year after “stepping back” as working royals, the couple signed a multi-year, multi-million dollar deal with Netflix. From the beginning, royal watchers — Sussex stans and detractors alike — wondered if they would be producing content about themselves. So when Meghan confirmed in October that they would release Harry & Meghan, their story in their words (and pictures!), people wondered what scandals and secrets would be revealed. Well, it turns out the best part of Harry & Meghan was not a dramatic revelation (there were very few, more on that in a bit). It wasn’t some big announcement. It wasn’t an epic confrontation between brothers. No: it was Beyoncé, who was not actually shown or even involved in the series. Her appearance, if you can even call it that, lasted a grand total of about 27 seconds. But it was perfect, specifically Prince Harry’s reaction to it.

The moment comes about half-way through the last of the six episodes, a point in the documentary when the infamous Oprah Winfrey interview has aired. The pair sit side by side at the desk they share. After a quick check in with her mom, Meghan looks down at her phone: a moment that stands as prelude to, hands down, the best moment in the 6-hour series.

This, friends, is Prince Harry’s reaction.

If you haven’t seen the series, you may think I just perfectly captured a split second where he looks silly. I’m not above that generally — making famous people look goofy is funny — but believe me when I promise you that’s not the case here. As soon as the prince heard Queen Bey had texted his wife we get a simultaneous gasp, lingering pan to the camera, and floating, enthusiastic jazz hands.

“Shut up,” he says when he turns back to Meghan.

“Just checking in,” she giggles.

“I still can’t believe she knows who I am!” Meghan gushes, and — quick sidebar here — on the one hand it’s cute and on the other hand is an eye roll and a half. Meghan, this whole documentary is about all the press attention you get for marrying a literal prince and you’re telling me you’re agog that a pop star knows you? Come on now.

Meghan recounts the text to Harry. “She said she wants me to feel safe and protected, she admires and respects my bravery and vulnerability and she thinks I was selected to break generational curses that need to be healed.”

“That’s well said,” the prince replies thoughtfully and duh Harry: she’s Beyoncé. She wrote Lemonade. Wise words of recognition and affirmation toward women, and Black women in particular, are a part of her whole deal.

But back to that reaction.

Absolutely it was not just a highlight for me, but the highlight. Maybe it’s because, after following the Sussexes for the past few years, everything in the docuseries came across as a bit superfluous. We saw the wedding. We saw the lawsuits. Most of all we saw the Oprah interview, where the big bombshells — racism in the palace, mental health struggles, losing oneself in a public facing role — were first revealed. Maybe it’s because, compared to telling one’s story through an interview, an hours-long docuseries felt more self-serving than previous iterations of the same stories, so I was hungry for levity.

Maybe it hit my funny bone extra hard because I’d been watching the series for almost three straight hours at that point and was already getting a bit punchy when a royal prince randomly did jazz hands for Beyoncé. But hit my funny bone it did. It’s been over 24 hours and I’m still giggling. Every time I look at the screenshot (which may or may not be my wallpaper now) I burst into peals of laughter. It’s the face of a man who is at once actually awed and also being cheeky. A man who’s like “My grandmother was a queen but this is the Queen.” A man whose reaction is funny because he’s a prince, but in this moment he’s also all of us: this is the face of everybody, everywhere — prince or not — who finds out they are now momentarily a degree of separation from Beyoncé.