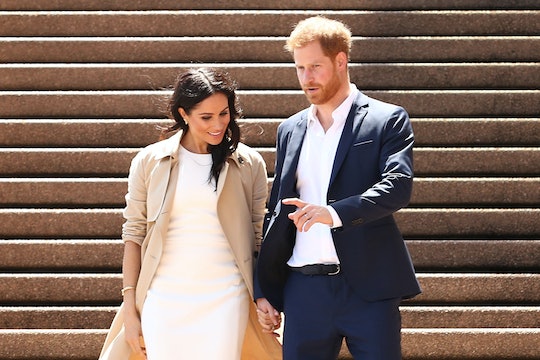 Prince Harry Has Sought Out Therapy To Deal With Childhood Trauma

Meghan Markle suggested it after an argument.

Prince Harry lost his mom when he was just 12 years old. As if that wasn’t difficult enough, he had to grieve for her publicly, walking behind Princess Diana’s casket as a little boy as the world watched his every move. It was an experience that stayed with him and affected him for years, but it took his wife Meghan Markle suggesting he seek therapy before he finally began to heal.

“It was meeting and being with Meghan,” Harry explained to Oprah Winfrey in the first episode of the pair’s new docuseries The Me You Can’t See. “I knew that if I didn’t do the therapy and fix myself that I was going to lose this woman who I could see spending the rest of my life with.”

The Duke of Sussex opened up to Winfrey about what it was like for him to walk behind Princess Diana’s casket alongside his older brother Prince William, his grandfather Prince Philip, and his dad Prince Charles in August 1997. Where was he expected to greet members of the public who were grieving the death of his mother.

“For me, the thing I remember the most was the sound of the horse's hooves going along the Mall, the red brick road,” he said. “By this point, both of us were in shock. It was like I was outside of my body.”

Harry has long been a champion for mental health awareness through his charitable organizations like Heads Together, which he supported alongside Prince William and Kate Middleton, but it seemed he needed a push to deal with his own mental health.

When Harry met and fell in love with Meghan as a grown man, he admitted to Winfrey there were still elements of that young boy that affected him deeply. So much so that Meghan recommended he seek treatment.

“When she said, ‘I think you need to see someone,’ it was in reaction to an argument that we had,” Harry shared. “And in that argument, not knowing about it, I reverted back to 12-year-old Harry. The moment I started therapy, it was probably within my second session, my therapist turned around to me and said, ‘That sounds like you’re reverting to 12-year-old Harry.’”

The Duke of Sussex, who is dad to 2-year-old son Archie and expecting his daughter with Meghan this summer, has now been in therapy for four years. He is learning to be open and transparent about his own mental health journey through his AppleTV+ docuseries with Winfrey, The Me You Can’t See, streaming now. And it seems 12-year-old Prince Harry is finally getting a chance to deal with some of the trauma he experienced. Thanks in part to his wife.