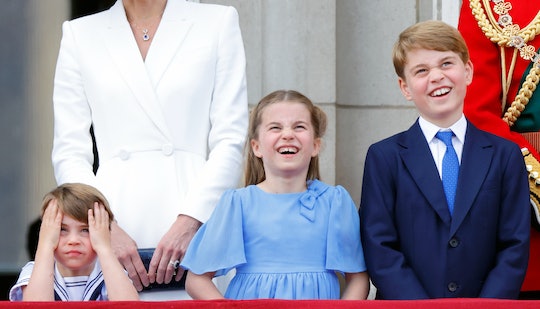 It totally suits him, TBH.

We know him as Prince Louis, the 4-year-old son of the Duke and Duchess of Cambridge and fifth in line to the crown. But to his 9-year-old brother Prince George and 7-year-old sister Princess Charlotte, he is someone else entirely. Apparently, to them he always has been and probably always will be “Lou Lou.”

The Daily Express reports that the two oldest Cambridge kids have long been calling their little brother “Lou Lou” as a term of endearment. The nickname certainly makes sense — more sense, in some ways, than many of the other nicknames favored by members of the royal family. For example, Prince George is called “Tips” by his parents because his royal initials are PG and there’s a well-known British tea brand called PG Tips. That one is a quintessentially British sort of nickname, so perhaps especially appropriate for the future king of England.

As for Princess Charlotte, she is often called “Lottie” by her parents, but her dad Prince William has been heard calling her “Mignonette,” which is French for “little cutie.” Very appropriate for the proper princess we saw at the Platinum Jubilee, with her perfect curtsy, modeling good behavior and decorum.

Now that I think on it, Lou Lou is kind of the perfect nickname for Prince Louis. Or at least, the playful, silly, and fun little boy we all saw whopping it up at the celebrations for Queen Elizabeth in early June for her Platinum Jubilee. Now I want to go back and rewatch the video of Princess Charlotte scolding her little brother to see if she says something like “Lou Lou that’s enough!” That would really be a classic Mignonette/Lou Lou crossover.

The rest of the royal family is, of course, well known for favoring a nickname. Perhaps that’s what happens when people are always bowing or dropping into a curtsy in front of you. Nicknames like Lilibet, Cabbage, and ever my personal favorite, Gary (a la Prince William when he was a young boy) give Queen Elizabeth a chance to feel like a regular grandmother and mother — normal, as it were.

I suspect this will never be a big issue for our little Lou Lou.