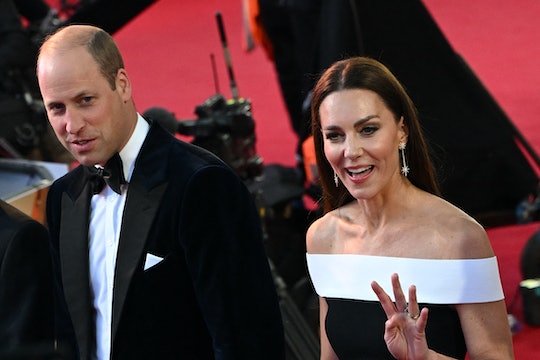 Of course it had to fall on a Thursday... Sorry, Prince George.

Prince William and Kate Middleton attended the UK premiere of the much-anticipated Top Gun sequel on Thursday, marking a pretty spectacular date night for the parents of three. Not that their kids were exactly thrilled for them to head out for a swanky night on the town with Tom Cruise and the rest of the cast of Top Gun: Maverick. The Duke and Duchess of Cambridge admitted that their kids were quite “jealous” of their night out, which makes absolute sense when you think about it.

The pair chatted with excited royal fans at the cinema in Leicester Square in London on Thursday, and naturally when they met young royal fans their own children, 8-year-old Prince George, 7-year-old Princess Charlotte, and 4-year-old Prince Louis, came to mind. Particularly when Prince William stopped for a chat with 9-year-old Alfie Everett-Fletcher and his mom.

As Alfie told Hello!, “He asked me what I liked about the last one, the things I like, if I like jets and planes and motorbikes,” before adding that his own kids were “jealous” that he and his wife got to see the movie without them. “He said they have had the theme tune for the film playing with their kids,” Alfie’s mom Alice Everett told the magazine.

That rather feels like rubbing it in a bit.

Now to be fair, Prince George has long been a fan of all things that fly but most especially airplanes and helicopters, so missing out on Top Gun: Maverick must have particularly stung for the future king. Middleton even told 11-year-old Poppy Saunders that Prince George and his siblings have seen the first Top Gun movie and “loved it” as well, adding that they “wished they were here tonight,” per Hello!. Middleton also explained exactly why her kids couldn’t come along, per People, “It’s a school night.”

Prince George, Princess Charlotte, and Prince Louis are getting older now and clearly becoming more aware of their parents’ absences for royal engagements. So much so that Prince William shared during a March trip to Wales that his kids “are always asking where we’re going” so he and Middleton show them on a map to give them a little geography lesson. And it’s not as though they are never invited along, before you start feeling too sorry for them. Prince George attended the Euro Cup with his parents recently, while the entire family went on a ski trip to France.

Perhaps Kate Middleton and Prince William will take their kids to see the new movie on the weekend. When it’s not, in fact, a school night.

More Like This
The Heartfelt Details You Didn't Notice In Kate Middleton & Prince William's Portrait
Prince William Cracking Up With His Three Kids In This Candid Photo Is Too Adorable
Prince William Shares How He Plans To Follow In His Mother's Footsteps With His Kids
Princess Charlotte Is Ready To Be A Soccer Star, Too