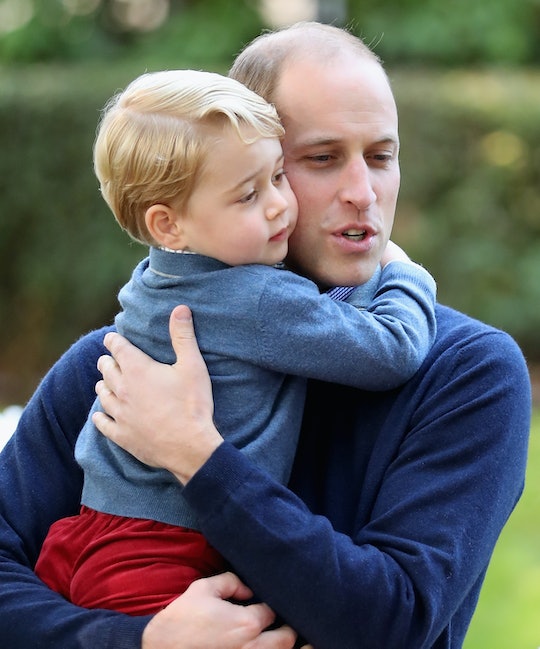 And Prince George was taking it all so seriously.

Prince William is handing down more than just the future of the monarchy to his oldest son Prince George. He has also passed down his love for soccer, and he’s clearly overjoyed that his 8-year-old son has taken up the banner with him. Especially now that Prince William can go to Prince George’s soccer games and stand on the sidelines cheering him on like a regular dad.

The Duke of Cambridge took Prince George to his soccer game on Saturday and truly looked like every other dad at every other Saturday soccer game the world over. Prince George was seen running on the field and looking very serious about the whole game, while his dad posed for a photo on the sidelines with the opposing team to model good sportsmanship.

The photos of Prince George and Prince William at the soccer game, which were shared on Twitter, were notable for a few reasons. First, Prince William proved he can blend in perfectly with just a baseball cap and jacket. Second... Prince George is seriously tall. Just like his mom and dad.

Prince George has long been a fan of soccer just like his dad, even getting all dressed up in a suit and tie to join his parents at the Euro Cup last June to watch England play in the finals. Despite his fancy attire, he got almost hilariously excited when England scored against Germany. He and his parents, who had left 6-year-old Princess Charlotte and 3-year-old Prince Louis at home for this solo outing with their oldest, all shared a big hug at the time.

If Prince George wasn’t in line for the throne, his dad actually thinks he could have a career playing for his favorite soccer team, Aston Villa. He told former soccer player Peter Crouch on his podcast when asked if he could imagine Prince George playing professionally, “Definitely, I reckon he could. I reckon he could be their all-time leading scorer. I can see no reason why not. It would be brilliant.”

That’s the kind of proud dad energy he was bringing to his son’s game on Saturday. Standing on the sidelines, cheering on his son. There was probably even a high five or two thrown in at some point.