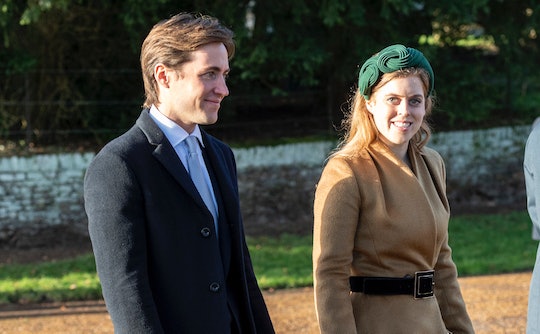 Princess Beatrice Opened Up Becoming A Stepmom To Her Husband's Son

The royal described her role as a stepmother as a "great honour."

After tying the knot in July 2020, Princess Beatrice's husband and stepson became de facto members of the royal family. And more importantly, they became members of Princess Beatrice' family... incredibly important members. The daughter of the Duke and Duchess of York has been settling into her new life as wife and stepmom and seems to be relishing every moment of it.

Princess Beatrice and her husband Edoardo Mapelli Mozzi were married last July in a small ceremony in Windsor, readjusting their plans for a bigger royal wedding after COVID-19 lockdown rules changed the world. The bride wore a vintage gown of her grandmother's, Queen Elizabeth II, and the service was held at the Royal Chapel of All Saints at Royal Lodge, just outside her parents' home, as the BBC reported at the time.

In the months since their wedding, Princess Beatrice and her husband have kept a low profile, which has presumably been relatively easy to do on account of lockdown measures in London. The quieter months of quarantine also gave Princess Beatrice the opportunity to spend time with her stepson, 4-year-old Christopher Mapelli Mozzi, who reportedly goes by the name Wolfie. Here's everything we know about Princess Beatrice' new role as a stepmom.

Wolfie is Mapelli Mozzi's son from his previous relationship with Dara Huang that ended in 2018, Tatler has reported. According to Hello! Magazine, they have been co-parenting their son since their separation.

In an article for The Evening Standard in honor of World Book Day, Princess Beatrice opened up about her new role as Wolfie's stepmom. "This year, I had the great honour to become a stepmother, and have had the most remarkable time going back over some of my most favorite stories at bedtime.”

She went on to share Wolfie's favorite bedtime story. "My stepson has been, as many children have, home schooling this term," she wrote. "Helping him to engage with stories is a great journey to inspire imagination, creativity, independence and humor. If you have not yet read the Oi Frog books by Kes Grey and Jim Field, they have fast become our favourite."

The Oi Frog books by Kes Grey and Jim Field are adorable board books filled with silly animals, unexpected rhymes, and lots of colorful pictures to keep kids entertained... and laughing.

Wolfie Was A Pageboy At Their Wedding

Little Wolfie was a pageboy at his dad's wedding.

Little Wolfie had a pretty big role at Princess Beatrice's wedding in 2020; he was one of the few people at the ceremony. And not only that, according to People, he was a little page boy. After all, it was a big day for him too.

Wolfie Is A "Much-Loved" Grandson

When Princess Eugenie, Princess Beatrice's sister, announced that she and husband Jack Brooksbank were expecting in 2020, her parents Sarah Ferguson and Prince Andrew shared their delight at the exciting news. But Ferguson was quick to add that she was already a grandmother to Wolfie. "Wolfie is already a very much-loved member of the family and and the Duchess is very keen to stress she sees Wolfie as their grandchild too," her spokesperson said in a statement to the Daily Express. Now that Princess Eugenie has given birth to son August, Wolfie has a new cousin.