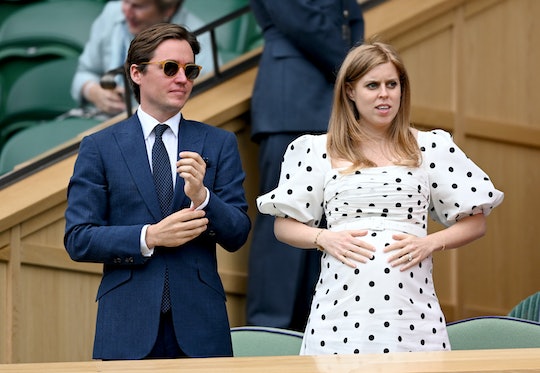 “The new baby’s grandparents and great-grandparents have all been informed and are delighted with the news,” Buckingham Palace said in a statement on Monday. “The family would like to thank all the staff at the hospital for their wonderful care.”

This is Queen Elizabeth II’s 12th great-grandchild, and judging from the statement, she’s thrilled.

Buckingham Palace shared in a statement that Princess Beatrice gave birth to a girl, but they did not include her name. They did, however, announce that the baby weights 6 pounds and 2 ounces. “Her Royal Highness and her child are both doing well, and are looking forward to introducing their daughter to her big brother, Christopher Woolf,” Buckingham Palace said in a statement.

A statement posted to Princess Beatrice’s Twitter account on Monday revealed that the baby was born at 11:42 p.m. on Sept. 18 at the Chelsea and Westminster Hospital in London. The new mom had to give credit to her midwife team, of course, and the rest of the staff at the hospital for their “wonderful care.”

When Princess Beatrice married Mapelli Mozzi in July 2020, she became a stepmom to his son from a previous relationship, Christopher Woolf, who reportedly referred to as “Wolfie.” Princess Beatrice has said that she loves reading him bedtime stories and will now have another new, eager audience to read to.

Princess Beatrice also became an aunt for the first time earlier this year when her younger sister, Princess Eugenie, gave birth to her first child, a son, named August Philip Hawke Brooksbank, in February. Now Princess Beatrice and Princess Eugenie can have some pretty fun playdates, especially since their kids are only seven months apart. Since the sisters themselves are only 21 months apart and are super close, it makes sense for their kids to be close in age. Anyone else think royal gatherings are about to be that much cuter?