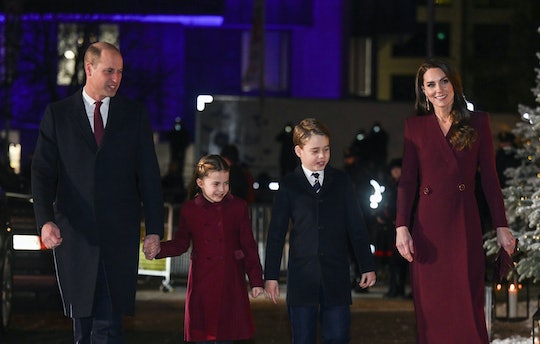 The young royals came out to support their mom’s second annual Royal Carols: Together at Christmas.

When Kate Middleton hosted her second annual Christmas concert, Royal Carols: Together at Christmas on Dec. 15, she had two fresh new faces in attendance. Her two oldest children, 9-year-old Prince George and 7-year-old Princess Charlotte, who attended alongside their father Prince William for the festive event. And they even dressed to match their parents in festive, though tasteful, ensembles.

The Princess of Wales greeted her children and her husband as they arrived at Westminster Abbey on Thursday evening to attend her second annual carol sing, this one done in honor of the late Queen Elizabeth. Middleton was wearing a long burgundy dress coat, and when her daughter Princess Charlotte got out of the car she was basically wearing the same thing. As was the case with Prince William and his son Prince George, who matched his dad in a smart suit with a burgundy tie.

The couple’s youngest child, 4-year-old Prince Louis, was not in attendance. Which was a shame because, if memory serves from when the youngest Wales child attended Queen Elizabeth’s Platinum Jubilee festivities in June, he really loved to sing and dance along to the music. But perhaps a royal carol sing at Westminster Abbey was considered a rather more sedate venue. At least Prince George and Princess Charlotte looked to be taking the event quite seriously.

Both Prince George and Princess Charlotte will be getting lots of practice singing carols over the Christmas holidays this year. Along with their mother’s royal carol sing, which saw the two children singing joining other royals like their grandfather King Charles, Queen Consort Camilla, Sophie, the Countess of Wessex, and even their grandparents Carole and Michael Middleton, they’ve also been enjoying some festive singing at their new school. Lambrook School in Windsor has had a full calendar of festive events including carol singing, so their voices should be in good form. And as their little brother Prince Louis is also a student at Lambrook, hopefully he got to join in the fun as well.

The royal kids are really getting into the holiday spirit this year, thanks in no small part to all of that carol singing.