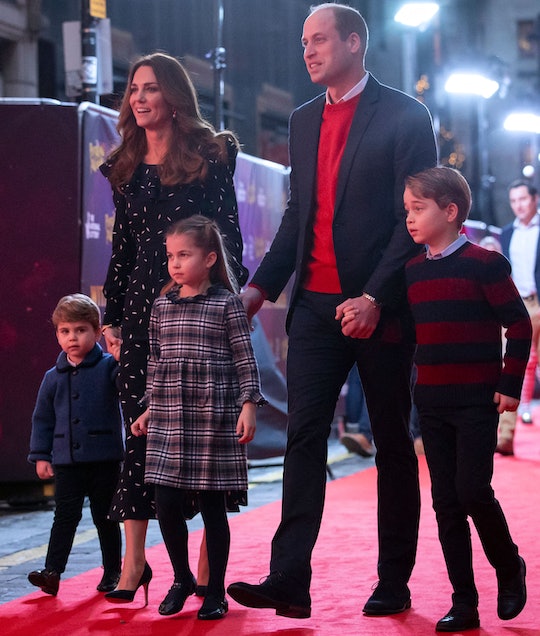 George, Charlotte, & Louis Will All Perform In Christmas Events At Their New School

Including a carol service!

King Charles III is about to spend his first Christmas as monarch, which will presumably come with a whole host of official royal events. Fancy gatherings, luncheons, all of the stuff a monarch is expected to do before they celebrate their own Christmas. Three of his grandchildren also have a full calendar of events for the holiday season, but their events sound like way more fun (no offense). The royal kids will be celebrating Christmas at their new school with holiday performances and even a carol sing, and maybe their grandfather the King will show up to record it all on his camcorder as is the time-honored grandparents’ tradition.

The Prince and Princess of Wales enrolled their three children, 9-year-old Prince George, 7-year-old Princess Charlotte, and 4-year-old Prince Louis, at Lambrook School this past fall when the family made the move from Kensington Palace to Adelaide Cottage in Windsor. Lambrook appears to be quite focused on creating a welcoming school community, and Christmas at the private school is no different.

“Christmas festivities and opportunities make it even more special for our pupils, with every single child performing in a Christmas event,” the school website announced, noting that some of the upcoming events include “Christingles, Nativities, Pre Prep House singing competitions and of course, our end of term Carol Service.”

This is especially exciting for Princess Charlotte, as her parents have both talked about her love of performing in the past. But she is by no means the only little performer in the family. Who could forget Prince Louis being the absolute star of Queen Elizabeth’s Platinum Jubilee events in June? And when it comes to performing in a school concert, future monarch Prince George has some experience from back in his Thomas’s Battersea School days in London. In 2017, Prince William opened up about watching his son in a school nativity play, proudly telling saying at the time per People, “I went to my boy’s nativity play. It was funny. He was a sheep.”

As the royal kids settle into their new school’s Christmas celebrations, both of their parents will certainly be making time to show up for them. The couple make a point of being available to their children whenever possible, and their mother in particular is a big fan of all things Christmas. Kate Middleton is hosting her own televised carol service along with most members of the royal family, hopefully with her children taking part in the event as well. It should be an exciting festive season for the whole family.