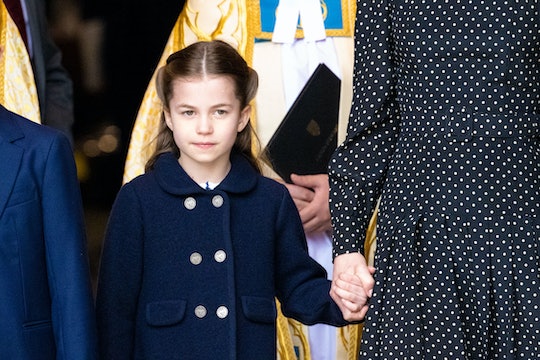 A little movie star in the making!

Word on the street is that Princess Charlotte loves acting. Sure, that might not come as a major surprise to royals fans; the 6-year-old daughter of Prince William and Kate Middleton is not often seen in the public eye, but when she is she has displayed a real flair for the dramatic. Apparently it’s a skill she is honing at school, where she is a thriving little student loving life.

A source with knowledge of Thomas’s Battersea School in London, where Princess Charlotte and her 8-year-old brother Prince George are students, recently shared some insight into the scholarly life of the young royal. “Charlotte is sharp and bright as a button,” the source told Us Weekly. “She is top of her class at reading. She actually enjoys doing homework.”

Well, it makes sense that she would love doing homework considering she was once asked to make spider sandwiches as part of her lessons, according Middleton. But it’s not just doing her homework that gives Princess Charlotte a real kick; she also “loves acrobats and is very into the arts and acting,” the source told Us Weekly. “Whenever she gets a chance, she’ll put on a performance!”

It’s true that royal fans have seen sporadic evidence of Princess Charlotte enjoying a little drama for an audience. Like all of those times she stuck her tongue out, for instance, or when she dramatically told reporters “you’re not coming” to her baby brother Prince Louis’ christening in 2018. More recently, Princess Charlotte was seen at a memorial for Prince Philip looking very excited when she saw herself on TV. Probably preparing for her future as an actor.

It has long been in Princess Charlotte’s nature to be creative and dramatic. Prince William admitted in 2019 that his daughter believed unicorns were real, after all, and her love for dancing and music is much like that of her late grandmother Princess Diana. She has been taking ballet lessons for some time, and Prince William shared a little story about how she and Prince George fight over their music choices before school because she likes to shake it to Shakira.

Perhaps she can talk to her aunt Meghan Markle about acting when next they meet for tips and tricks of the trade. You never know... another royal might yet become a movie star.