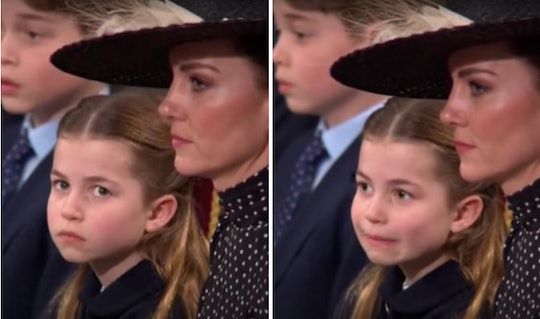 Princess Charlotte and Prince George joined their parents at Westminster Abbey for great-grandfather Prince Philip’s memorial service on Tuesday, and of course it’s always tough to be a kid at such a serious affair. On top of all the big, heavy emotions of the day, there’s also all of that sitting there and, let’s face it, getting bored. It can be difficult for a kid to just sit in church and find a way to occupy themselves. But 6-year-old Princess Charlotte found a way. When she saw herself on television she seemed to be utterly delighted, and naturally the rest of the world delighted in her delight.

The Duke and Duchess of Cambridge brought Princess Charlotte and her 8-year-old brother, Prince George, to the late Duke of Edinburgh’s memorial on Tuesday, leaving 3-year-old Prince Louis at home, presumably because he might have been a bit too young for the serious occasion. Indeed, even Princess Charlotte appeared solemn when she first arrived at Westminster Abbey holding her mom’s hand. Middleton appeared to comfort Princess Charlotte by reminding her that she was allowed to smile, and from that point forward she seemed more relaxed.

As Princess Charlotte gets older, chances are she will be expected to join more royal events every now and then. Until now, she has really only joined her parents for child-friendly events like seeing a Christmas pantomime or standing with the rest of the royal family on the balcony of Buckingham Palace for the Trooping The Colour. Now that she’s being included in more formal affairs, it’s a good thing she knows how to keep herself occupied.

More Like This
24 Photos Of Princess Charlotte Making Silly & Cute Faces
Kate Middleton Explains Why Her Kids Couldn't Attend The Top Gun: Maverick Premiere
Meghan & Harry Celebrated Their Anniversary As A Family Of Four For The First Time
Prince Harry & Meghan Markle Could Take Us Inside Their Home For A New Docuseries