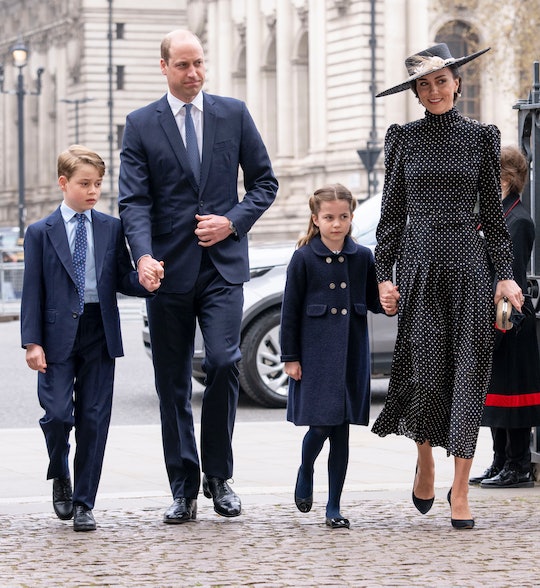 When Prince Philip died at the age of 99 in April 2021, it was an immeasurable loss for the whole royal family, including his 8-year-old great-grandson Prince George and 6-year-old great-granddaughter Princess Charlotte. The two young children, along with their 3-year-old brother Prince Louis, don’t have a lot of experience with death, so it was especially heartwarming to see how Kate Middleton comforted her daughter at Prince Philip’s memorial on Tuesday by reminding her that it was OK to smile.

Prince William and Middleton brought their two older children to Prince Philip’s memorial at Westminster Abbey along with other members of the royal family, including Queen Elizabeth, and around 1,800 mourners. When the Cambridge family was seen approaching the service, Princess Charlotte was looking a bit somber. Perhaps in an attempt to match the mood of the day, and lip reader Jacqui Press reported to The Daily Mail that Middleton told her daughter “you can smile” as they walked into Westminster Abbey. Naturally, Princess Charlotte listened to her mom. And she smiled as she chatted with the Archbishop of Canterbury Justin Welby.

Both Prince George and Princess Charlotte looked quite somber at Prince Philip’s memorial, which makes sense as the two children would not have really experienced such a serious event before. And of course, they knew their great-grandfather personally. The Cambridge kids spent many a Christmas with Queen Elizabeth and Prince Philip at Sandringham Estate. They also lived close to them in London at Kensington Palace, visiting them on summer holidays at Balmoral in Scotland. Not to mention the fact that their father Prince William was particularly close to his grandfather, especially after the death of his mother Princess Diana.

In a statement released after the loss of Prince Philip, Prince William noted that he was very grateful for the time his children were able to spend with their great-grandfather. “I will never take for granted the special memories my children will always have of their great-grandpa coming to collect them in his carriage and seeing for themselves his infectious sense of adventure as well as his mischievous sense of humor!”

Naturally, Princess Charlotte would feel a bit sad. But, as the Duchess of Cambridge reminded her, it’s OK to smile and celebrate the lives of those you love so dearly.

More Like This
24 Photos Of Princess Charlotte Making Silly & Cute Faces
Meghan Markle Made A Sweet Little Tribute To Her Daughter Lilibet
Kate Middleton Explains Why Her Kids Couldn't Attend The Top Gun: Maverick Premiere
Meghan & Harry Celebrated Their Anniversary As A Family Of Four For The First Time