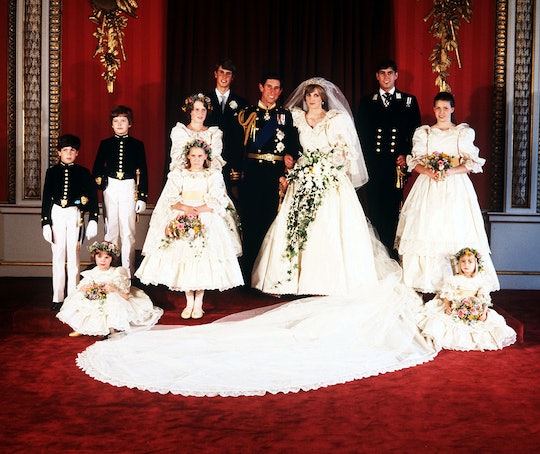 Princess Diana's Wedding Gown Will Be Displayed At Kensington Palace

The dress will be loaned from Prince William and Prince Harry, who gave their permission.

From a memorial garden to their wives’ engagement rings, Prince William and Prince Harry continue to keep their mother’s memory alive decades after her death. Indeed, this summer, the princes have given permission to have their mother, the late Princess Diana’s wedding dress on display for the first time in over 20 years as part of a new fashion exhibition.

Starting on June 3, loaned by her sons, Princess Diana’s stunning dress will go on display at Kensington Palace. It will remain on display until Jan. 2, 2022. The last time the dress was displayed was in 1995, according to The Telegraph.

The new exhibit showcasing the late royal’s dress will be called “Royal Style in the Making.” According to its website, the exhibit will examine "the intimate relationship between fashion designer and royal client.”

“The display features never-before-seen items from the archives of some of the most celebrated royal couturiers of the 20th century, set alongside examples of the glittering gowns and stylish tailoring created for three generations of royal women,” the exhibit’s description continues. “The wedding dress of Diana, Princess of Wales will also be on display, as the exhibition explores the fine art of designing for royalty.”

Princess Diana married Prince Charles at St. Paul's Cathedral in London on July 29, 1981. Her dress, which has been considered one of the most iconic bridal gowns in history, was designed by David and Elizabeth Emanuel and has a 25-foot train, reportedly the longest in royal history, according to CNN. The lace of the gown originally belonged to Queen Mary, Princess Diana's great-grandmother-in-law, and Prince Charles’ great-grandmother, according to the exhibition’s website.

"Its gently scooped neckline and large puffed sleeves are trimmed with bows and deep ruffles of taffeta, a style popularized by the Princess in the early 1980s," Historic Royal Palaces (HRP) explained on the exhibition website.

Princess Diana would have turned 60 years old this year. She was born on July 1, 1961 and was tragically killed in a car crash in Paris in 1997 at the age of 36. Her sons allowing her iconic gown to be on display on her birthday and beyond is a touching way to share their mother’s memory and legacy with those who admired the “people’s princess.”