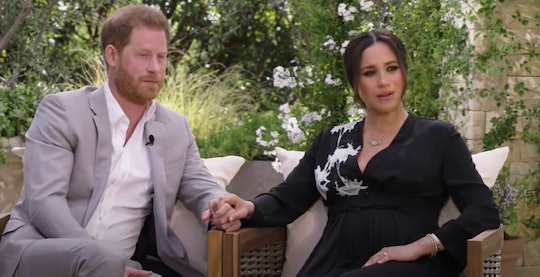 The Duchess of Sussex donned a beautiful piece of jewelry that once belonged to Princess Diana.

Once again, the Duchess of Sussex has paid tribute to her late mother-in-law in a touching, subtle, and beautiful way. In a sit-down interview with Oprah Winfrey airing on March 7, Meghan Markle wore one of Princess Diana's bracelets that has a lovely connection to the engagement ring Prince Harry gave her.

The Duke and Duchess of Sussex sat down with Winfrey for the CBS Primetime special, Oprah With Meghan & Harry, the couple's first lengthy interview since moving to the United States permanently and stepping back from their senior royal duties. In a sneak peek at the interview, Markle was seen wearing a black Armani dress and a diamond bracelet that once belonged to Princess Diana, as People reported. And that bracelet was reportedly used as inspiration to craft Markle's engagement ring, which includes three diamonds, two from his mother's personal collection and the third from Botswana, according to People.

Unsurprisingly, the duchess put plenty of thought behind her jewelry choice. In fact, it seems both Prince Harry and Markle thought about how to incorporate his late mother. "They wanted to wear the bracelet to have (Harry's) mother there with them during the interview," a spokesperson for Markle told TODAY.

The sentimental gesture is especially poignant considering that the couple talks about the Princess of Wales and the British tabloid media's treatment of her with Winfrey. "My biggest concern was history repeating itself," Prince Harry tells Winfrey in a teaser clip from the interview, presumably referring to his decision to leave the United Kingdom and step back from his senior royal duties.

In a separate interview with James Corden on The Late Late Show with James Corden that aired last week, the 36-year-old prince called the British media "toxic." "It was a really difficult environment, as I think a lot of people saw. We all know what the British press can be like. And it was destroying my mental health," Prince Harry shared with Corden. "I was like, 'This is toxic.’ So I did what any husband and father would do... I need to get my family out of here."

The Duke and Duchess of Sussex now live in Santa Barbara and the California lifestyle seems to be treating them well. The first preview clips of the interview show the couple glowing, specifically Markle, who is pregnant with the couple's second child. "For me, I'm just really realized and happy to be sitting here, talking to you with my wife by my side," Harry tells Winfrey in another teaser clip. "Because I can't begin to imagine what it must've been like for her [Princess Diana] going through this process by herself, all those years ago; because it's been unbelievably tough for the two of us, but at least we have each other."