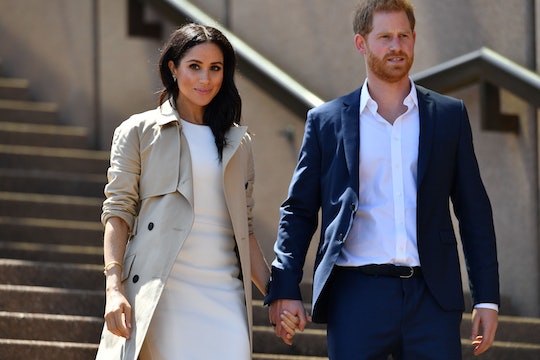 It has been 23 years since her death, but the Princess of Wales has never been forgotten. Least of all by her two sons and their family, no matter how far from the United Kingdom they might roam. On the anniversary of her death, Meghan Markle and Prince Harry honored Princess Diana at a preschool in California by planting flowers. Forget-me-nots, which were her favorite flower and, of course, also a symbol of how her youngest son will never forget her.

The Duke and Duchess of Sussex spent some time working in the garden with preschoolers at the Assistance League in Los Angeles, according to Town & Country, a center which provides educational assistance for at-risk children from low-income homes in the area. The couple have mostly been keeping a low profile since moving to the Los Angeles area in March but now that they've settled into their new home with 1-year-old son Archie in Montecito, California, they're starting to venture out more (particularly when they can be of service to a local charity).

On Monday, Markle and Prince Harry got their hands dirty in the garden at the Assistance League Preschool Learning Center and planted some forget-me-nots. Monday also happened to be the 23rd anniversary of the death of Prince Harry's beloved mother, Princess Diana, who died in a car crash in Paris in 1997.

Since those were her favorite flowers as per Grand Central Floral, and she was devoted to children's charities in her own lifetime, there really was no more perfect way to honor her memory.

Prince Harry was just 12 years old when he lost his mother, and he has opened up in the past about how that loss profoundly affected him throughout his life. In fact, he made it patently clear in an ITV documentary from last November, Harry & Meghan: An African Journey that the loss of his mother is a "wound that festers," telling Tom Bradby that it changed the way he saw his royal role. "I think being part of this family, and this role, and this job, every single time I see a camera, every single time I hear a click, every single time I see a flash, it takes me straight back. In that respect... it’s the worst reminder of her life as opposed to the best."

Now that he and his wife have stepped away from their senior royal roles and actively chosen a more private life, Prince Harry can find ways to remember his mother in better ways. Like spending time with children and a wife who clearly adores him, planting forget-me-nots in the sunshine.