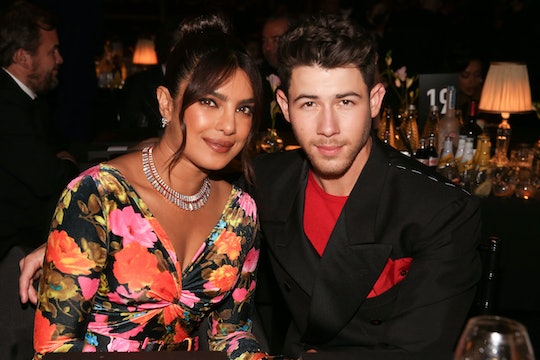 Priyanka Chopra and Nick Jonas are enjoying a family vacation with their precious 8-month-old, and their daughter has hit the fun milestone of swimming in the pool. While the couple’s firstborn isn’t quite old enough to show off her flips and dives yet, one thing is for certain — little Malti Marie’s baby sun hat game is strong.

In some recent Instagram Stories, Chopra posted some adorable pictures of the summertime fun. The Quantico star first posted a polaroid of the family of three together in the shallow end of an infinity pool. Chopra sat in a chair that was perched in the pool with Malti cradled in her lap, while hubbie and singer Nick Jonas knelt beside them. The new mom is obviously serious when it comes to sun protection as the baby girl is wearing a hat while also being shielded by a large pool umbrella. Jonas also shared the same picture on his Instagram with three added red hearts. The couple seem to enjoy to tag-team their social media accounts by uploading the same pictures or duplicate announcements.

Chopra also shared another cute snap of Malti’s hand against a beautiful embroidered napkin. "MM approved," she wrote over photo, alluding to the initials of her daughter’s meaningful name that’s a nod to both of her grandmothers.

The growing Jonas family has been through a lot as they welcomed their daughter via surrogacy, and then also underwent some scary health challenges with the baby, that have thankfully been resolved. With so much going on, it’s great to see Chopra and Jonas enjoying some carefree R&R as a sweet trio.

While the married couple of three years have followed suit of other celeb families by choosing not to reveal their kids’ faces online, they still manage to share intimate moments of their home life with fans and followers. In an interview with Vanity Fair, Jonas told the magazine: “We both know that public life is something that comes with what we do, but we’ve set real boundaries around our personal lives, our privacy, and worked really hard to create that little safe haven for ourselves with our friends and family.”

Even though the famous duo has decided to protect their baby’s privacy by posting a white heart emoji over tiny Malti’s face, there’s still no hiding her cuteness.