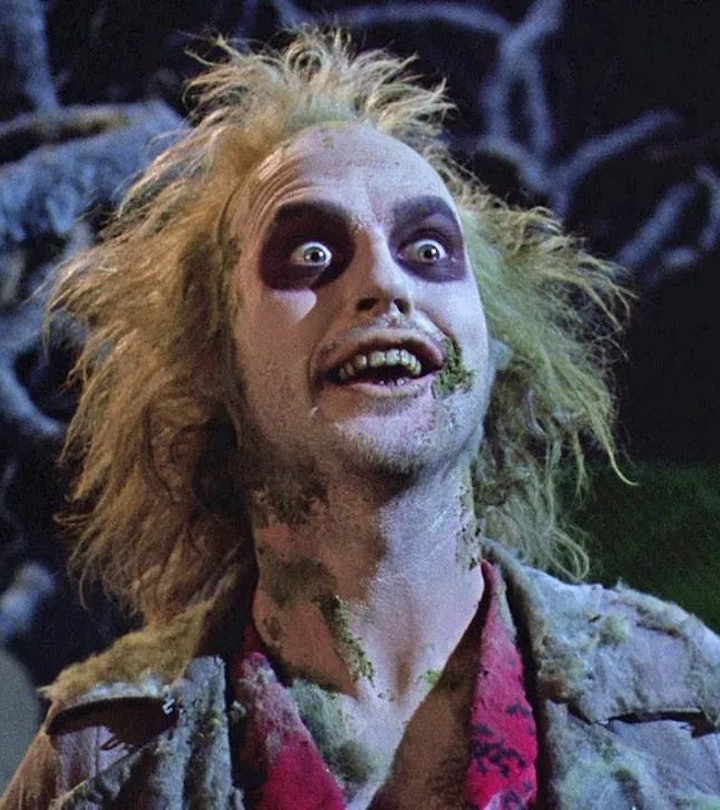 I Rewatched Beetlejuice As A Mom...

...and Lydia really speaks to my Gen X soul.

Back in 1988, I was a teenager (do not do that math) at a movie theater watching Beetlejuice on a date with a boy. At the time, I wanted to marry Alec Baldwin and a perm to get hair like Geena Davis. I also wanted to be exactly as authentic as Winona Ryder. Sure, I thought Michael Keaton was funny too, but honestly the movie didn’t make a very spooky impression on me. Until I became a mom and watched it with my kids. Now I get it, this movie is really about being a latchkey Gen X kid who desperately wants to be loved by their parents. Or any parents, for that matter. Even ghost ones. Here are my thoughts while rewatching this Halloween classic through a mom’s eyes.

Parenting is a big theme in Beetlejuice.

Let’s start with the opening scene from Tim Burton’s 1988 Beetlejuice, when Adam and Barbara Maitland (Alec Baldwin and Geena Davis) are still happily alive, living in their dream house in the country and deciding if it’s time to start trying for kids. They both want to become parents and then they die, but does that stop them from having those deep-seated parenting instincts? Nope. As soon as Lydia Dietz (Winona Ryder) moves in after they’ve died, the two of them see her as their child in a sense. Barbara is constantly craving that mother-child bond, to the point where their goal is to just stay ghosts living in their house forever helping her with homework.

Truly no one ever wants to leave that house, not even after they’re dead. In fact, all Charles Dietz (Jeffrey Jones) wants to do once he finds this house is make himself cozy in his library and drink tea and try to relax. Not just because he’s a homebody, to be fair, but because he is constantly dealing with trying to be a dad and a husband at the same time.

Raising kids with a new spouse can apparently be really helped out by a haunting.

Delia Dietz (Catherine O’Hara in a pre-Moira Rose role that is just as iconic) is an artist who has zero interest in relocating to the countryside in Connecticut and she makes sure her husband Charles knows about it. His daughter Lydia is not happy about Delia and she makes sure Charles knows about it. Charles keeps trying to hide out in different rooms to avoid confrontation, until Adam and Barbara haunt a dinner party and the whole family realizes the missing ingredient to their modern family. Two ghosts to keep things interesting. Just as an FYI.

No matter how cool your kid is, they still just want to be loved.

Lydia is all about being disinterested and over it in a way that really speaks to my Gen X soul. It was really a thing for the Gen X crowd to be sort of over everything. Big eye-rollers, disinterested, but secretly vulnerable. Also there’s the whole latchkey kid element. Lydia’s parents have no clue what she’s doing at school or anywhere else, always off in their own world doing their own thing. This is classic Baby Boomer-raising-Gen-X behavior. You know Lydia was probably making her own after school snack that was just a sleeve of Premium Plus crackers and peanut butter and writing in her journal and acting bored.

But deep down she, like every other kid out there, just wants to be loved. Not by Beetlejuice, of course, but by her father and her new pretend ghost parents and even Delia a little bit. By the end of the movie she’s ditched her Goth clothes, which was a bit of a shame in my opinion, for a school uniform and an A on her math test and dance parties in the living room with Adam and Barbara.

Beetlejuice does not completely hold up.

Michael Keaton is a force in this movie and clearly having a blast, but some of the bits in the movie do not hold up. Like when he wants Lydia to be his child-bride or looks up Barbara’s skirt or kisses her. It’s not the most sexually inappropriate movie from the ‘80s, but watching it did bring me back to a time when that was totally normal. Did not love.

All these years later, I still won’t say his name three times in a row.

It’s like that Bloody Mary in the mirror thing. I’m not risking it.

Get ready for your kids to have lots of questions about death.

Dead people are the stars of Beetlejuice and they’re not exactly happy about it. Not only are Adam and Barbara dead by drowning within the first few minutes, they encounter very unhappy dead people in the most depressing waiting room that has ever existed. It’s not like anyone expects death to look fantastic in movies, but there is something especially awful about being dead in Beetlejuice. It’s like life with all of the forms and monotony and learning how to scare people but add a family redecorating your house while you live in an attic and a ghoul named You-Know-Who causing all sorts of trouble. I don’t know if kids will find these dead people extra sad but as an adult... I needed to go lie down for awhile. To think I might still be looking at paint chips for the living room even after I’m dead? Come on.

Where can you watch Beetlejuice?

You can stream Beetlejuice on Amazon Prime Video or rent it on YouTube or Apple TV+. Just don’t do it three times in a row to be on the safe side please.