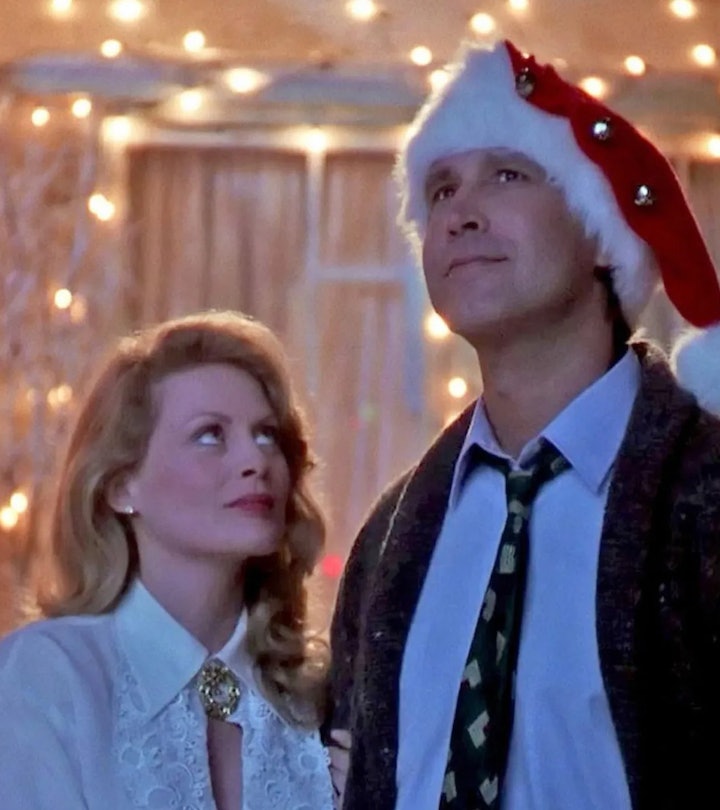 Sparky was honestly the man of my single mom dreams.

I was a teenager when Christmas Vacation first came out in 1989. I liked it okay back then. I liked laughing at ridiculous Clark Griswold (Chevy Chase) who could never get anything right. I was embarrassed for him. I didn’t understand what his unflappable wife Ellen (Beverly D’Angelo) saw in him. But now I’m a mom myself. And now I know. This John Hughes holiday classic is an ode to real life Christmas and all of us real life parents who are just trying to create memories. One disastrous day after another. So don’t you dare judge Clark. Don’t you dare. Here are a few more thoughts I had rewatching this Christmas classic as a parent myself.

Before I get down to the business of vehemently defending Clark Griswold’s every ill-fated decision in Christmas Vacation, let me point out one area where he went wrong for those who, like most of us, have seen the movie dozens of times. Why invite both sets of parents for what appears to be an entire month? Is there anyone you want in your house for a month who does not already live there? And even then... it would be nice to have a break.

Ellen does attempt to tell her beloved “Sparky” to maybe dial it down a bit but he’s not hearing it. He has already ripped a Christmas tree out of the ground with his bare hands after a walk through a frozen forest with Ellen and their two kids, Rusty (Johnny Galecki) and Audrey (Juliette Lewis). He survived driving under a truck. Survived a car crash into the Christmas tree lot. It’s possible Clark thinks he’s immortal and honestly, I can see why he would. Nothing can kill him, not even falling from a ladder or off a roof.

But two sets of parents staying for weeks is a terrible idea.

Now that I’m a mom myself who desperately wants everyone in the family to make memories, I can see that Clark is not the reason things go wrong in this movie. I know what it’s like to put together a Christmas itinerary full of sleigh rides and cookie baking and tree trimming only to have the rest of the family sort of stare blankly at you. And so, like Clark, I doubled down. He goes bigger, better, more exciting. And he never really gets any credit for it. Especially from his father-in-law Art (E.G. Marshall) who points out once Clark finally gets his light display to work, “The little lights aren’t twinkling.”

Thanks for nothing, Art.

Listen, Clark looks good in his cardigan and tie.

Just a quick note of appreciation for Clark’s Santa hat and cardigan and Christmas tie. I had some deep feelings about this man when I was a single mom dealing with the holidays alone. I’m just saying that Ellen was right to adore him. He’s trying so hard and that cardigan is doing him a lot of favors.

Clark is beyond patient.

When Cousin Eddie (Randy Quaid) shows up with wife Catherine (Mirian Flynn) and their two children uninvited, who is it that gets stuck with Eddie? That’s right, Clark. Who does his best to host Eddie while everyone else makes themselves scarce. I don’t see anyone else joining Clark and Eddie as they take the kids sledding or going shopping for dog food for Snot. It’s just Clark. And honestly he takes it like a champ until he doesn’t.

Don’t we all have an annual Christmas meltdown?

My holiday experience has never included a squirrel attacking my family, a boss being kidnapped after cutting out my bonus, or even Catherine doing whatever the hell she did to make that turkey smoke and open of its own volition which still gives me nightmares. My holidays have been easier than all that, and yet. I have a yearly Christmas meltdown. Over too many dishes and not enough hands. Over stocking stuffers. Over making so much food I feel like I’m in a fugue state. So hats off to Clark Griswold, under-appreciated at home, at work, and on Christmas day especially, for holding it together as long as he did.

Also hats off to him for thinking his Christmas was a success because he managed to not burn his house down. Taking wins where he can.