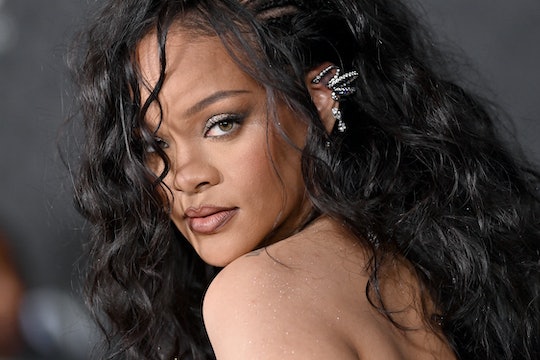 For the first time in six years, the world is about to be blessed with a new song by Rihanna as a solo artist. Perhaps even more significantly, this will also be her first song to be released since becoming a mom. Indeed, it should be interesting to hear how that massive life shift has affected her music.

Rihanna hit the red carpet in Los Angeles on Wednesday night alongside her partner A$AP Rocky for the premiere of Black Panther: Wakanda Forever, the sequel to the Marvel hit Black Panther. This was the first time Rihanna has been out on the red carpet since the arrival of her baby boy in May, and she was there for a good reason. To support the movie, of course, but also to represent the song she co-wrote for the film. A song that drops on Oct. 28 called “Lift Me Up.” Yes, mark your calendars.

The singer wrote “Lift Me Up” with Tems, producer Ludwig Göransson, and Black Panther director Ryan Coogler for Chadwick Boseman, the star of Black Panther who died in October 2020 after a battle with colon cancer.

Rihanna shared a teaser trailer of the song on her Instagram page on Thursday, offering her followers a little hint of what they can expect to be listening to for the foreseeable future. Because you know people are going to be listening and dissecting this song for days. Perhaps to hear any possible connections that the new mom might make to her life with her baby boy.

Since becoming a mom, Rihanna has been staying firmly out of the public eye as much as possible. Presumably adjusting to the monumental shift she has gone through in recent months. Certainly her friend Lizzo admitted to Andy Cohen that their texting has gotten considerably less sexy since Rihanna became a mom, which sounds accurate for those early days of motherhood.

It will be interesting to hear if this new dynamic will be at play in her first new song since ANTI came out in 2016. As the song is intended to be a tribute to Boseman, “Lift Me Up” might stay firmly grounded in honoring the late actor and his legacy, particularly as it pertained to the Black Panther franchise.

More Like This
It’s Britney(‘s Birthday), Bitch!
David Beckham Impressed Mariah Carey With His Rendition Of "All I Want For Christmas"
Julia Louis-Dreyfus Holds Hands With Son Charlie Hall At White House State Dinner
Brendan Fraser Brought His Two Teenage Sons To The Premiere Of His New Movie