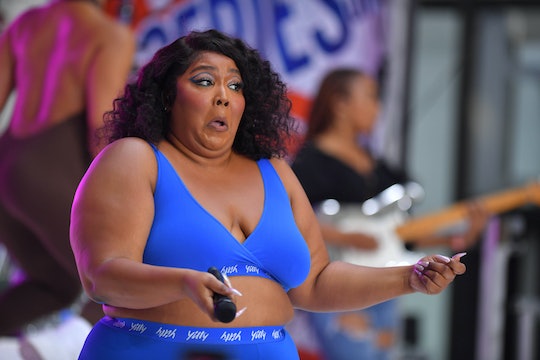 Oh to be a fly on the wall... pre-Mommihanna days.

Parenting changes everyone. Even Rihanna. You can take comfort from this or find it mildly disconcerting, but either way just know that it’s a universal experience. That’s what Lizzo learned after Rihanna and A$AP Rocky welcomed their baby boy together, at any rate. It seems the two friends had a very different type of conversation before Rihanna became a mom, and now things have changed.

The “Truth Hurts” singer opened up about her friendship with Rihanna during an interview with Andy Cohen on What Happens Live With Andy Cohen, explaining that their texting relationship is pretty sexy. “My conversations with Rihanna are more sexual, I guess,” she told Cohen. When he asked in return, “You talk about sex a lot?” Lizzo clarified, “We don’t talk about sex a lot, but we’re just always giving it to each other. We don’t talk about work, it’s all play with me.”

All of that was in the before times, however. Before Rihanna welcomed her first child, a baby boy, in May. Now Lizzo says the sexy texting has ended. “But not since she’s been, you know, mommy. ‘Mommihanna’. So, congratulations to her and A$AP Rocky.”

Rihanna’s change in behavior post-baby might come as a bit of a surprise to some. The ultra cool singer did have a rave-themed baby shower that she co-hosted with A$AP Rocky and admitted she wanted her friends to get “plastered” to celebrate. But at the same time, Rihanna was also hinting heavily that she knew life would be different once she became a mom. In fact, she said she would be taking her cues from some of the stars of Real Housewives like Heather Dubrov, who she credits as being “so chic while being a mom. Just love the way that she just allows her kids to be who they are. And that's really inspiring to me.”

This tells me she probably watched Lizzo’s episode of What Happens Live because she’s a fan.

While things have changed for Rihanna, she’s still her own person. When a fan asked Lizzo who sent her the most salacious texts, she said it was Rihanna. “I think that’s just how she talks.”

She might be a mom, but Rihanna still has to be herself. That’s what friends like Lizzo are for; to help hold on to the person you are when you’re not being a mom.

More Like This
Dan Levy Just Proved He's The Ultimate Uncle With This Perfect, Sweet Answer
Khloé Kardashian Made A Cute Little Nod To Her Newborn Son With A Tiny Blue Accessory
Priyanka Chopra & Nick Jonas Marked A Fun Summer Milestone With Baby Malti
Khloé Kardashian Has Welcomed Baby #2 Via Surrogate & Is Keeping The Name A Secret