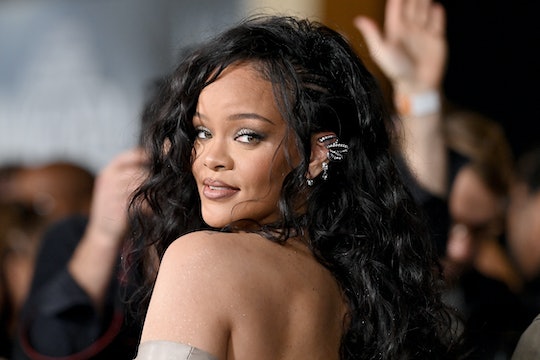 Now that Rihanna is six months into her life as a first-time mother, she’s ready to talk about how her baby boy with A$AP Rocky has changed her life. How he makes her feel, the sweetest things he does, what her life looks like now. And when trying to really encapsulate all of those amazing feelings, Rihanna explained to Access Hollywood that the beginning of motherhood “is like tripping on acid every day.”

“Life starts over when you become a parent. It’s life that you’ve never known before,” the proud mom, who welcomed her baby boy in May, told Access Hollywood. She expanded on her acid trip metaphor, telling the reporter that motherhood is “wild, trippy as hell.”

“You look at him and he’s yours but he’s a stranger and you’re learning him as he’s learning you and learning the world. When he looks at me in my eyes, my whole soul…I can’t tell if it’s cold or hot,” Rihanna continued.

It sounds as though she’s in baby bliss, and the sweet disposition of her baby boy is certainly not hurting matters. Rihanna told People during her recent fashion show that her son “is funny, he's happy — and he's fat! He's amazing. It's a real cuddly stage right now.”

Mother and son already have a little ritual they enjoy together. They enjoy an early morning hangout. “Oh my god, the mornings, like, seeing his morning face,” Rihanna told Entertainment Tonight about her favorite motherhood moments. “Seeing a baby with, like, little bags and waking up and they’re just, like, startled. They’re trying to figure out where they’re at. It’s the cutest, it’s my favorite part of the day.”

There doesn’t seem to really be anything she doesn’t like about being a mom. She’s even a fan of her postpartum body, her booty in particular.

As for A$AP Rocky, he’s ready to enjoy one perk of parenting with their son. Watching cartoons. He told Dazed magazine this summer that he wants to raise “open-minded children” who hold on to their imaginations, “I will always remind my children to never lose their imagination, even as adults, no matter what,” he said, per People. “I actually love to watch cartoons — I've watched like Teletubbies, Blue's Clues, Yo Gabba Gabba, Peppa Pig and Baby Shark.”

These two have taken to parenting in record time.