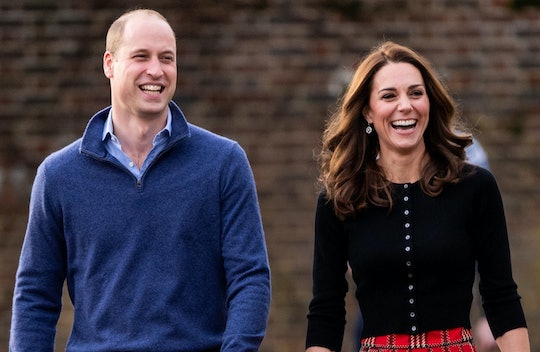 C’mon! Think of all the hiding opportunities at the palace!

It’s a delightful picture to imagine, the idea of the Elf on the Shelf being hidden around Kensington Palace. Or Anmer Hall. Or Sandringham Estate. The smiling little elf peeking out from behind crown jewels to see if 8-year-old Prince George, 6-year-old Princess Charlotte, and 3-year-old Prince Louis are behaving themselves. Sadly, it’s just a Christmas fantasy. During a question and answer period for Radio Marsden on Thursday, Prince William was asked about Elf on the Shelf and it turns out that no one has clued him in about this international holiday phenomenon.

Prince William was surprisingly candid answering holiday-themed questions from young cancer patients at the Royal Marsden Hospitals in London. He opened up about how he loves to spend Christmas with his extended royal family, admitting that food is a “very important” part of his celebration and he can always find “a tiny bit of space left in my stomach somewhere for a bit of turkey or sausage or a bit of wine,” per People.

What he doesn’t appear to be finding space for is an Elf on the Shelf. When asked about the popular tradition, Prince William admitted, “I don't know what Elf on a Shelf is.”

Prince William has never heard of Elf on the Shelf.

He might not have heard of Elf on the Shelf, or Google come to think of it, it’s not like it’s hard to find, he is particularly fond of one elf at Christmas. Will Ferrell. Or Buddy the Elf as he is known in the 2003 classic holiday movie Elf. Prince William named Elf as his favorite Christmas movie, and admitted he has seen it many times but “it still makes me laugh.”

As for a favorite Christmas song, he likes “Feliz Navidad” but will naturally listen to all Mariah Carey Christmas hits if given the chance. Like everyone else on the planet.

While the royal kids might not see an Elf on the Shelf this Christmas, they most certainly believe in Santa Claus. Or Father Christmas as he tends to be called in the UK. In 2019 Prince William talked to volunteers at a royal dinner for A Berry Royal Christmas Special about what Father Christmas would be bringing Prince George. Something to do with drawing or football.

Maybe he should ask for an Elf on the Shelf for Christmas 2022. Then his dad would have to learn about it.