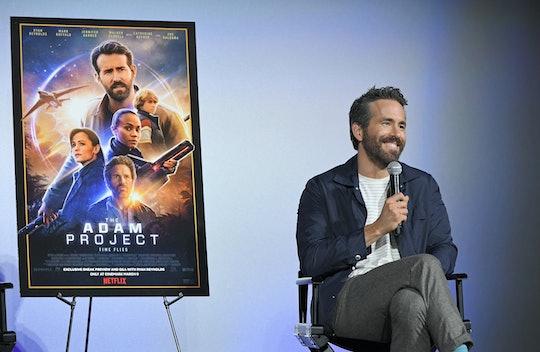 Dad of three Ryan Reynolds got cornered during a Q&A for his new Netflix movie The Adam Project recently. He and co-star Jennifer Garner, who plays his mom in the time-traveling adventure flick, answered questions from audience members about aspects of the movie. And one question from a curious kid landed Reynolds in a hilariously uncomfortable position.

A young boy in the audience knew exactly what he wanted to ask when he was given the microphone at the event for The Adam Project. “Ryan, in the scene where you were kissing the girl,” the boy asked, referring to Reynolds’ on-screen love interest Zoe Saldaña, “was that real?”

The audience laughed, of course, giving Reynolds a few moments to recover. His initial response was simply, “Whoa!” while Garner teased him by saying, “This is the best Q&A ever.”

While The Adam Project is definitely a fun adventure movie kids will love, the young boy in the audience is right. There was, indeed, some kissing in the movie. Which is perhaps one of the reasons it was rated PG-13. Because kids see kissing on-screen, and the questions are sure to follow.

Reynolds answered, “Um... I didn’t mean it?” with a shrug. Then he went on to say that he has been struggling with this question in his house as well.

“This is the thing, I don’t know how to explain this to my own kids,” said Reynolds, who shares 7-year-old daughter James, 5-year-old daughter Inez, and 2-year-old daughter Betty with wife Blake Lively, and it appears they had some opinions when they saw him kissing another woman on-screen. “They watch this and they’re like, ‘Daddy, what are you doing?’ It’s like exactly the tactic I would use on them. Not anger, but just disappointment.”

His daughters won’t have to worry too much about seeing him kiss on-screen in the near future. Last November, Reynolds announced his plans to take a break from acting in an effort to spend more time at home with his family. “I’m just trying to create a little bit more space for my family and time with them,” he said at the time. “You know, you don’t really get that time back.”

Now he’ll have more time to come up with a better response about his on-screen kissing habits than “Whoa!”

More Like This
Zac Efron Was Asked If He Wants Kids & His Hilarious One-Word Answer Says It All
Kate Middleton Explains Why Her Kids Couldn't Attend The Top Gun: Maverick Premiere
Chris Pratt & Katherine Schwarzenegger Welcomed A Baby Girl With The Prettiest Name
Why Prince Harry Feels Lucky To Be A "Father With A Platform"