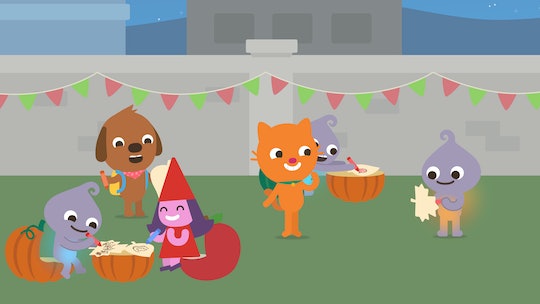 The animated series based on a popular children’s app is celebrating the holiday season.

This holiday season, you can teach your kids about gratitude with the help of Sago Mini Friends’ new Thanksgiving special premiering in November 2022 on Apple TV+. Harvey, Jinja, and Jack from the animated preschool series come together to eat, laugh, and show grace. It is a whole treat for the family to watch together and a great addition to add to your Thanksgiving TV episode line-up!

Sago Mini Friends’ Thanksgiving special is all about gratitude.

In the new Thanksgiving special “Happy Thankful Day,” while getting ready for a special Sagoville festival, Harry the dog and Robin the bird accidentally find themselves in Loomington, a town without gratitude. Gasp! Like other episodes in the series, parents can expect their kids to learn the value of kindness no matter how big or small in the holiday special. As a matter of fact, each episode is dedicated to good deeds.

The Thanksgiving special would not be complete without some catchy tunes and one popular song you can probably expect to hear is the series’ catchy “I’m Thankful” song. We can’t say it's as addictive as “Baby Shark,” but close enough!

Sago Mini Friends is based on a children’s app.

The Canadian children’s series, which premiered this year on Apple TV+ on Sept. 16, is based on the award-winning Sago Mini World app, developed by Sago Mini, and features over 40 games for kids ages 2 to 5 years old. The app encourages children to tap into their creative side and play, build, create, and pretend with digital games that spark their curiosity.

“I know preschool viewers are growing up in a turbulent world, and my sincere hope for Sago Mini Friends is to be a ray of sunshine (or a bright and colorful rainbow spewed out of a singing unicorn’s horn) for them,” executive producer Tone Thyne told Animation Magazine. “I sincerely hope the show will playfully instill the importance of gratitude in a seamlessly delightful way, and I sincerely hope the show will spark imagination and emulate the five important Cs so beautifully showcased in the Sago Mini app: curiosity, creativity, communication, collaboration and creative problem-solving.

The Sago Mini Friends app is available on Google Play.

Sago Mini Friends' “Happy Thankful Day” premieres on Apple TV+ on Nov. 18. New subscribers can stream Apple TV+ for $4.99 per month with a seven-day free trial. And if your kiddos need more of the show’s whimsical characters, print off a Sago Mini Friends Thanksgiving placement for them to color.

And of course, after Thanksgiving, it’s Christmas! So after you’ve put up your twinkly lights, stay on Apple TV+ and start streaming all of the Christmas specials, including all the classics from the Peanuts.

More Like This
'Sesame Street' Puts Fun Spin On 'The Nutcracker' In New Holiday Special
Here’s How To Watch Every 'Modern Family' Thanksgiving Episode
Surprise Your Kids With This Exclusive Sneak Peek At Mickey Saves Christmas
New Blippi Live Show Is Coming To A Stage Near You In 2023!