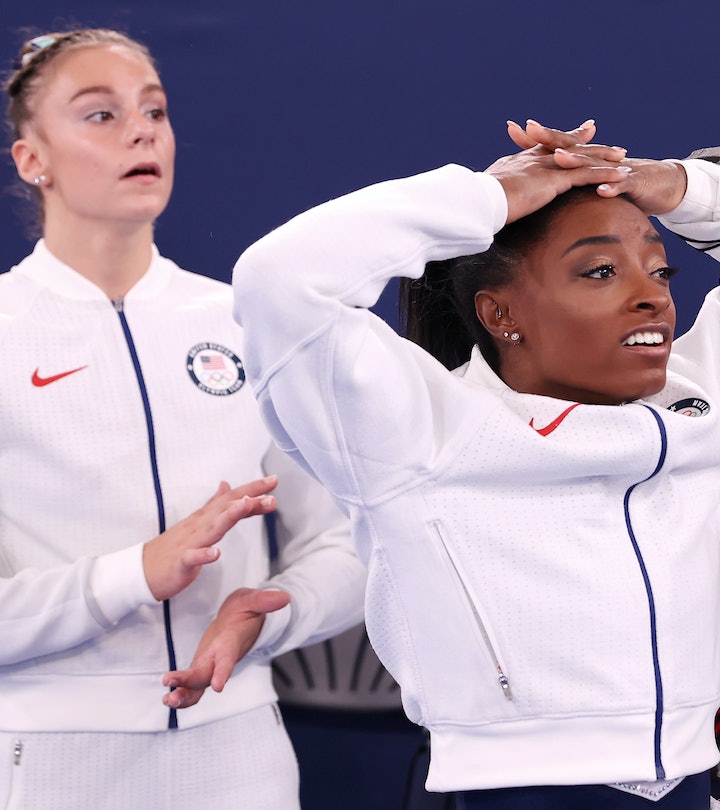 She’s being assessed for “future competitions.”

After suffering from a “medical issue,” Simone Biles withdrew from the 2020 Tokyo Olympics women’s gymnastics team finals. The gold medalist is still being assessed for further competition, but her fans are already calling her the greatest of all time, no matter what might happen in Tokyo this summer.

Biles last competed in team finals on the vault, where she was seen walking off the mat and being attended to by the Team USA doctor Marcia Faustin before leaving the arena entirely. Shortly after her departure, USA Gymnastics released an official statement about her withdrawal from the team finals, “Simone Biles has withdrawn from the team final competition due to a medical issue. She will be assessed daily to determine medical clearance for future competitions.”

The American team of Sunisa Lee, Grace McCallum, and Jordan Chiles, who was subbed in to compete in the uneven bars in place of Biles, went on to win silver, with the Russian team taking gold. Biles returned to support her teammates, congratulating them and hugging them on the sidelines after their silver medal win.

In an emotional interview on Tuesday, Biles broke down explaining her need to protect “her body and mind,” CNN reported.

"Whenever you get in a high stress situation, you kind of freak out," Biles told reporters. "I have to focus on my mental health and not jeopardize my health and well-being. It just sucks when you're fighting with your own head," she said.

According to Biles, her teammates initially wanted her to continue competing.

"I was like: I think the girls need to do the rest of the competition without me. They were like 'I promise you'll be fine, we watched you warm-up.' But I said 'no, I know I am going to be fine but I can't risk a medal for the team and I need to call it.’ You usually don't hear me say things like that because I usually persevere and push through things, but not to cost the team a medal. So they were like: OK, if Simone says this, we need to take it pretty serious. I had the correct people around me to do that.”

Biles is taking Wednesday as a “mental health day” before deciding what to do on Thursday.

"This Olympic Games, I wanted it to be for myself,” Biles told reporters, according to ESPN. “But I was still doing it for other people. It hurts my heart that doing what I love has been kind of taken away from me to please other people."

At this point, it’s unclear whether or not the four-time gold medalist will continue to compete at the Olympics. Biles has qualified for all four event finals later in the Games and is scheduled to compete in the all-around finals, which she won at the 2016 Olympic Games in Rio de Janeiro, on Thursday.

The pressure on Simone Biles heading into the Tokyo Olympics was enormous. Not only because of the expectations thrust on her by fans and the media (she even had her own Twitter emoji of a goat to symbolize her greatest of all time status), but also because she was unable to have her family come with her as a support system. On Monday she shared an emotional Instagram post in which she admitted that pressure can be a real struggle to overcome, especially when she doesn’t feel she performed at her best: “It wasn’t an easy day or my best but I got through it. I truly do feel like I have the weight of the world on my shoulders at times. I know I brush it off and make it seem like pressure doesn’t affect me but damn sometimes it’s hard hahaha! The olympics is no joke! BUT I’m happy my family was able to be with me virtually. they mean the world to me!”

Biles’ future at the Tokyo Olympics remains unknown, but fans around the world are cheering her on nonetheless. They already know she is an incredible athlete, but by prioritizing her own mental health and cheering on her teammates, she has cemented her status as a positive role model for kids everywhere, medals or no medals.